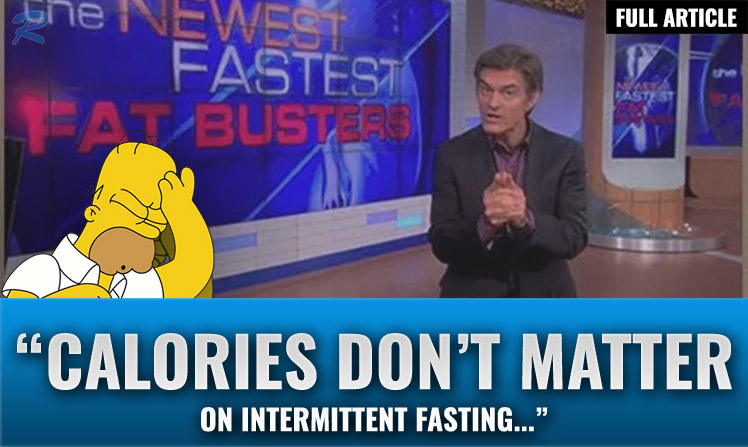 Intermittent fasting is a great tool for losing weight.

It’s something I’ve used quite a few times with clients down the years, and I recently released this comprehensive IF guide showing you how to get the most out of it.

But I’ve noticed there’s a lot of confusion surrounding this topic.

Specifically, it’s about whether calories matter. Seriously, whenever I speak about using intermittent fasting to lose weight, I am hit with beliefs like:

It’s likely due to the number of snakoil salesmen who have jumped on the IF bandwagon in recent times, packaging it up as some miracle fat loss solution, but the bottom line is OF COURSE calories still matter.

In fact, they are ALL that matters.

Intermittent fasting is a tool to help you control your calorie intake, which will then lead to weight loss. There is no magic at work behind the scenes, and you cannot eat whatever you like just because it falls between the hours of 2pm and 10pm, despite what these ‘gurus’ will lead you to believe.

So I recently had a conversation with a friend which went like this:

“I’ve started using intermittent fasting. It’s great for fat loss, and I can literally eat whatever I want, so long as it’s in my feeding window.”

My response was a simple: NO, YOU F**KING CAN’T.

But as I raised an eyebrow of skepticism to his claims, I could tell it was already too late, he was sold on a miracle diet.

So I let him fail on his own.

Over the following weeks he gained 10lbs and began searching for another weight loss model that promised instant results without sacrifice. Last time I checked, he was doing a sugar free diet, which sounds as appealing as pooing a hedgehog.

Unfortunately, intermittent fasting was doomed the minute it became a hashtag.

Charlatans were quick to repackage a proven calorie control method into a 28 day fix, and were prepared to say anything to make a sale. You’ve seen the ones I’m talking about.

Make no mistake, the reason intermittent fasting helps you to lose weight is because it makes it easier to stay within your calorie budget by blocking off several hours per day.

There is no magic at work, and the old rule of calories in versus calories out still rings true. (1)

So the next time a professional bulls**tter tells you something about weight loss that sounds too good to be true, I’d like you to take it with a pinch of salt. Believe me there WILL be a next time. The fitness industry is so riddled with motherf**kers looking to make a fast buck, we’ve already seen some ridiculous trends:

The cabbage soup diet… Twinkie diet… Honesty diet… whatever next?