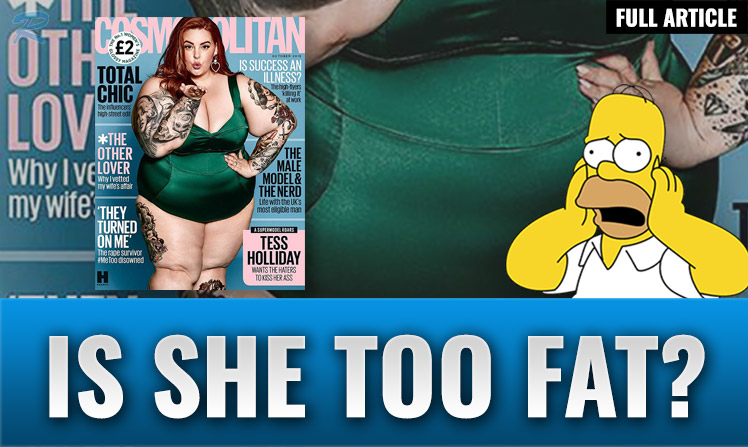 IS TESS HOLLIDAY “TOO FAT” TO BE ON THE COSMO COVER?

Cosmo recently put plus-sized model Tess Holliday on the cover, and people around the world are misplacing their excrement.

Does it glorify obesity? Are they sending women the wrong message about body image?

Obviously, given that I work in the fitness world, a lot of you have asked my opinion on this. So in today’s aticle I’ll give you my take on the situation, and you can leave me a comment at the end if you like.

I don’t have a problem with Tess Holliday being on the cover of Cosmopolitan.

Fair play to her.

And f**k have they sold an atomic s**t-tonne of magazines by doing it?!

The marketing team at Cosmo are undoubtedly laughing all the way to the bank while suddenly all the people who post #bekind on their social media profiles are calling for this lady to be photoshopped because she doesn’t represent the usual size and shape we associate with fitness.

I’ve been in the fitness industry since the early 2000’s (yes, that long!), and at no point in time has Cosmopolitan every been considered a fitness magazine. It’s just a magazine. They write about celebrities and s**t.

They’re not saying this is what your goal physique should be – and SHAME ON YOU for saying this lady doesn’t deserve to be on a magazine cover just because she’s overweight!

F**k you with a capital fist.

At this point I think we genuinely need to consider placing humans in giant bowls of rice and resetting them.

Honestly, the one thing this whole debacle highlighted for me is that people f**king suck. Whether it’s fit shaming or fat shaming, we need to change our ways.

We’ve arrived at a stage in humanity where more young men than ever before are being diagnosed with mental health issues due to trying to live up to impossibly high standards on social media, and this is something women have been dealing with for decades.

The article itself is nowhere near as controversial as the cover image, to be honest. Tess Holliday speaks about her weight loss journey and details the routine she’s been following, it’s pretty standard stuff – but in this era of women empowering women to succeed, I find it f**king absurd that I, a man, have to tell everybody to stop being absolute thunderc**ts to a total stranger.

It sucks. Stop it.