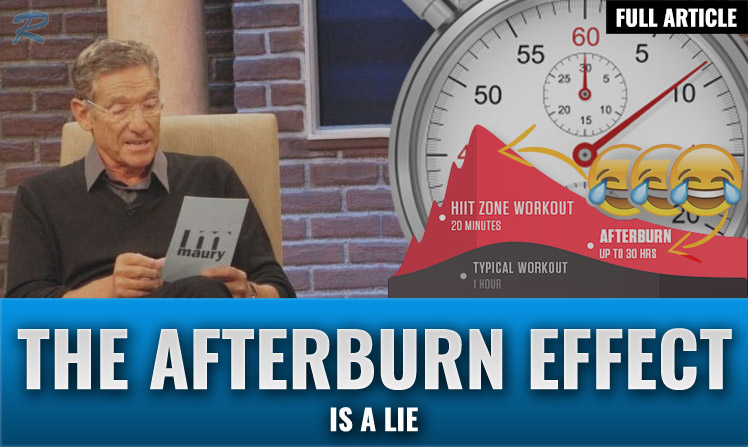 IS THE AFTERBURN EFFECT REAL?

You see, a lot of trainers love hyping the afterburn effect as a miracle fix. They’ll say it’ll have you burning fat for 24, 30, even 48 hours after every workout. I’m going to show you the direct opposite – the afterburn effect is NOWHERE NEAR as effective as you’ve been told.

The key difference is I’m bringing you the science to back it up.

So in this article I’m going to debunk a plethora of bad advice on this topic; Is the afterburn effect real? How many calories does it burn? How long does it last?

Let’s get stuck in.

IS THE AFTERBURN EFFECT REAL?

When people hear that HIIT lets them train for less time but burn more calories, it’s understandable that it sounds ‘too good to be true’, but it’s a genuine thing.

The afterburn effect is otherwise known as EPOC (excess post-exercise oxygen consumption) and it’s the process by which we smash through carbohydrates in our HIIT session, before switching to burning FAT for fuel after the workout ends and continuing to burn calories at an accelerated rate in the hours that follow.

HOW MANY CALORIES DOES IT BURN?

Now that we’ve established it’s real, the next question you’ll want to know is “Does the afterburn effect really work?”

And this is where things get stupid, because unfortunately the truth is not as sexy as the hype. If you ask 10 different personal trainers or HIIT classes how many calories you can burn in their workouts, they’ll throw some astronomical numbers your way in a bid to win your business.

A prime example of this can be seen at a local gym in my area, where the trainers insist that for every 500 calories you burn during the session, you’ll burn an EXTRA 500 calories in the hours that follow thanks to the afterburn effect.

The claim above suggests a 1:1 ratio of calories burned, which is significantly higher than anything ever shown studies on high intensity interval training. In reality, a 2006 meta-analysis published in the Journal of Sports Sciences found that EPOC leads to an increased calorie burn of 6-15%, so if you burned 500 calories in a HIIT class the afterburn effect could bump this to 530-575 kcals. (1)

That’s a far cry from the fat avalanche you were promised.

Also, the same study suggested most people aren’t capable of training at the required intensity to unlock the full benefits of EPOC anyway, and that it’s a tool only really beneficial to top-end athletes:

“The optimism shown in earlier research regarding the importance of EPOC in weight loss is generally unfounded.

This is further reinforced by the fact that the exercise stimuli required to produce prolonged EPOC is unlikely to be tolerated by most individuals.”

HOW LONG DOES THE AFTERBURN EFFECT LAST?

This is another area of confusion for many, because trainers literally MAKE S**T UP.

The graphic above suggests you’ll be burning fat at an accelerated rate for a whopping 30 hours after your HIIT workout ends.

Not only that, but given that the average burn for an hour of ‘regular cardio’ is about 600 calories, it’s showing that you’ll still be burning over 600 calories PER HOUR for a significant time after your session finishes.

F**k… if EPOC was this effective you’d be dead in a week!

Of course, figures and graphics like this are created because it sells programs. So then along comes another trainer who ups the ante:

(These graphics are REAL, by the way!)

Pfft… Because why do a 30 minute bums n’ tums class that’ll make you burn fat for 30 hours when you can go next door and burn fat for 48 hours!?!

This is the world we live in. Pretty soon you’ll have trainers promising their program lets you do one workout per week and continue burning fat until next week.

A 2011 study published in Medicine & Science in Sports & Exercise shows that EPOC (the afterburn effect) lasts a maximum of 14 hours. This is MUCH LESS than the figures advertised above, and no doubt it’s less sexy – but these are FACTS. (2)

Which brings me to another thing…

In recent years I’ve seen many bulls**tters claiming that ‘normal cardio’ (i.e. getting on a treadmill and jogging) is a complete waste of time because it can’t compete against the calorie burn of a HIIT workout.

The information you’ve seen so far should disprove that.

Don’t get me wrong; I love HIIT. I do it all the time. But it’s not for everyone and if you prefer doing regular cardio then that’s not a problem at all!

Contrary to what these motherf**kers will say, you are NOT missing out on results, the afterburn effect is NOT going to quadruple their calorie burn, and you should do the type of training you personally enjoy.

This was expertly shown in a 2017 meta-analysis published in Obesity Reviews, which looked at the entire body of academic research surrounding both aerobic cardio and HIIT before concluding that there was virtually no difference in fat loss results. (3)

So there you have it, and don’t let these motherf**kers tell you otherwise.