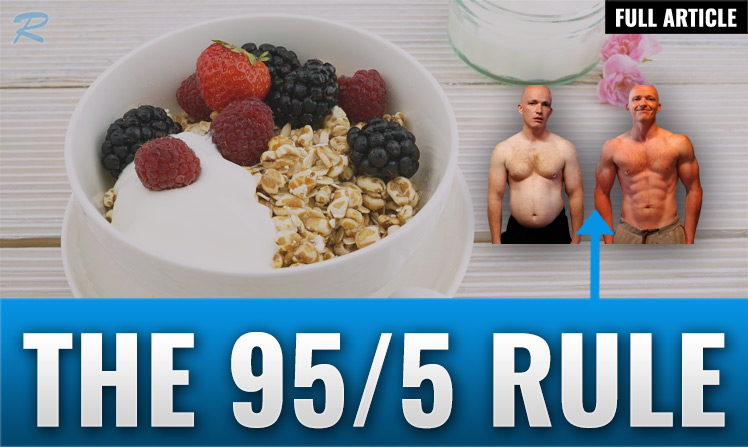 Use My 95/5 Rule To Build Muscle And Burn Fat

There’s something weird going on in the fitness world.

We have made huge advancements in the realm of supplementation, we have stacks of info at our fingertips relating to training and nutrition…

… but now, more than ever, people are LOST.

They’re not seeing the results they want, and they don’t know why.

And for the majority of people, we’re lost because we’re over-complicating it. We’re getting caught up in the “fluff” that doesn’t work, and the good stuff is being lost in the shuffle.

If you had to write down your fitness goals, your dream physique, right now, what would you write?

Do you want to gain more muscle mass?

Would you like to focus on losing body fat?

What if I told you that 95% of the new results you’d like to see are really there for the taking..? You may think I was lying, right? Because every “expert” loves to over-complicate the holy mother of f**k out of nutrition…

But I’m not lying. 95% of your potential results are there for the taking – we just need to focus on the right things!

That’s what my 95/5 rule is all about. It’s about getting you to pay attention to the things that matter. The things that give you the most bang for your buck (the 95%), and not paying attention to the flashy stuff which has minimal impact but over-complicates things to the point where we can’t stick to it (the 5%).

Here’s how to do it…

Think of how most people start a new diet.

They’re gonna cut out carbs… or avoid dairy for a month… perhaps even go vegan for January.. oh, hey, there was a celebrity in some magazine saying we should all do a raw goat’s milk cleanse…

The common theme here is that all these things belong in the 5% club.

Some of them are completely useless, while some have minor benefits, but none of them typically lead to success.

Because a massive 95% of your weight loss results will come from just two things:

Sure, we can also use additional techniques like intermittent fasting, or meal timing – but they are also in the 5% club, because despite the fact they have their own set of benefits, they won’t make the difference between you gaining or losing weight. (3, 4)

Using this ultra-simple approach will feel very weird at first, because we are so used to over-complicating things, but the 95/5 rule is about learning to focus only on the things that matter the most.

By making your diet as easy as possible to stick to, you will see a big improvement in your results because you can finally be consistent.

From this day forward, you’ll only add the fancy stuff (the 5%) if it makes your big stuff (the 95%) easier to do (i.e. some people find intermittent fasting can help make it easier to control total calories, because it limits the time they have available to eat therefore limiting potential to over-eat, so that makes sense). We won’t use something just because some motherf**ker in a magazine called it the next big thing without any evidence.

Think of how the same issues can affect your progress in the gym.

Instead of doing the things which give us the greatest results, we get caught up in the 5% stuff that has little impact (if any at all), and we don’t see the body we want to see.

In terms of a general overview of fitness, your 95% stuff would include joining a local gym and making a commitment to train at least 3 times a week.

Your 5% stuff would be crazy things like saying “and then I’m gonna also do cardio at home each night” – nice idea, but this is the stuff which usually pushes us over the edge. Training with such frequency either makes things unsustainable (which defeats the point), or it leads to injury, or it ruins our nutrition by making you eat everything in sight, and undoes your hard work.

Besides, I’m not a fan of the whole “training twice per day” thing in general.

I believe if you have the time and energy to train twice per day you should stop being a lazy f**k hanging out at the gym and go get a second job.

But we can eradicate the need entirely by being smarter when we are inside the gym, by applying the 95/5 rule to exercise selection.

Your 95% stuff means making sure you get your cardio in, and performing big compound lifts like deadlifts, rows, squats, etc. All the stuff that just flat-out works.

The 5% club would be those flashy exercises you saw an Instagram chick doing, or little tweaks on isolation exercises that make it a bit more effective. For instance, I recently shared the video below where I showed you something called Atomic Lunges. See below:

This is an excellent leg builder – but it’s a 5% exercise.

If you are starting out in the gym, you do not need things like this. You see? Being in the 5% club doesn’t mean something is useless, it just means you don’t need it yet.

Just like we did with nutrition, the goal is to nail the 95% until it becomes a permanent lifestyle change. You’ll be VERY surprised how far you get with only this.

Then, if/when you add any of the 5% stuff later, it works the way it’s supposed to by giving you that little bit extra once those solid foundations have been firmly laid.

I’ve been there before.

You understand what the 95/5 rule means. You think it makes a lot of sense. You can even see the benefits and identify where you were going wrong in the past… but things NEVER work for you, right?

You’ve tried every “next big thing” diet and famous workout routine and NONE OF THOSE MOTHERF**KERS got results – so now you’re full of self-doubt.

You see, we’re programmed to believe that our diets and training need to be life consuming.

That comes from all those wasted years spent on overly complex nutrition plans which had you eating Himalayan rock salt and drinking disgusting kale smoothies, and workout programs which had you spending half an hour training f**king forearms.

So here I am, essentially telling you do less, to stress less, to worry less, but get better results – and it makes no sense because how could it?

Consistency is the number one factor in any solid fitness program. That’s what the 95/5 rule builds. Because without consistency, even the greatest training plan in the world becomes ineffective. The people who are in the best shape at your local gym aren’t those who train the hardest, or diet the strictest, but those who do things with great consistency.

You’ve heard me say “the best diet is the one you can stick to” before, and this is exactly why.

You know I’m right. Because you know I know my s**t, and the science is there to prove it.

People wonder how my clients are able to still eat burgers, chocolate, etc. It’s because they do the 95% stuff very well. They focus on consistency, and workout programs they can stick to, rather than the typical “all or nothing” approach you see in the fitness world, which leads to failure and the feeling of constantly punishing yourself and trying to “get back on it”.

If you need someone to give you a slap and develop training programs that get you practicing “the 95%” to great effect, that’s why I built my website. See here.

And if you require help structuring your nutrition with foods that do the 95% stuff for you (and that you can stick to), make it easier again by using my Musclefood meal prep option – click here and enter code RussHowe at checkout for the discount – tell it your target calories and they’ll build your weekly diet for you. Bosh.