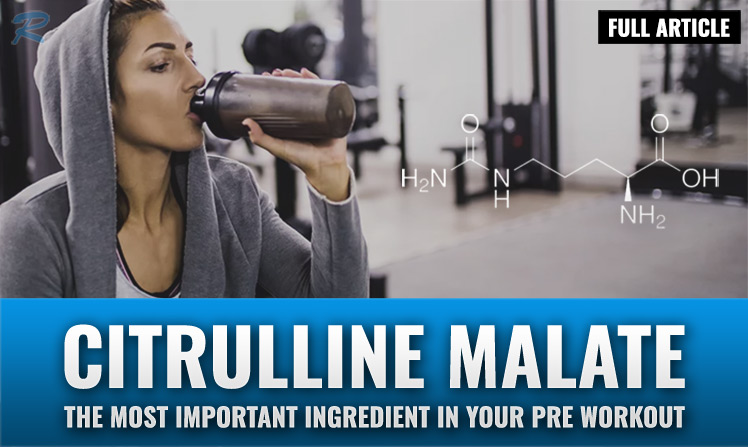 Citrulline Malate: The Most Important Ingredient In Your Pre Workout

The many benefits of citrulline malate make it the most important ingredient in your pre workout supplement.

It might not get the plaudits of caffeine, or beta-alanine, but make no mistake, citrulline malate is THE FIRST THING I get people to look for when buying a new pre workout!

So what is it about this ingredient that makes it so special?

Today I’m going to provide you with a full breakdown of what citrulline malate is, what it does, and the benefits of using it before you hit the gym!

BONUS CONTENT: Click here to learn how to create “the perfect pre workout” by combining citrulline malate with 3 other ingredients.

WHAT IS CITRULLINE MALATE?

Citrulline is an amino acid. It’s found in watermelons, cucumbers, and pumpkins.

You’ve likely heard of amino acids before. They are the “building blocks” our body uses to build muscle.

Looking at that list, you may be wondering where citrulline is. Don’t worry, you aren’t going crazy…

When citrulline enters the body it becomes arginine (that’s why I highlighted l-arginine above). Supplement companies attach a malic acid molecule to it, too, hence the name citrulline malate, or CitMal for short.

Before we go any further, I can confirm that studies show this ingredient is completely safe, with no negative side effects. (18)

So what happens when you add citrulline malate to your pre workout?

Well, this is where things get REALLY INTERESTING…

There are several ways CitMal can improve your training, and they’re all pretty major! Let’s take a run through each of them right now.

YOU’LL GET A BETTER PUMP

Compared to the other benefits of citrulline, this one might seem a little, dare we say, superficial?!

Because while the benefits of having a great pump while exercising are definitely good for the ego, they also hold some potential rewards for the long-term, too. After all, this enables longer, more intense workouts that will help you build more lean muscle and burn more fat.

The crazy pump happens because citrulline works as a nitric oxide booster, thanks to its effects on the urea cycle. Greater nitric oxide production leads to the widening of blood vessels (vasodilation), which allows us get a great pump and look “fuller”. (1)

A pump is fantastic, but now we get to the REAL reason you should be using citrulline malate – with continued usage, the improvements we make to muscular endurance are astonishing!

Ammonia is a waste product of intense exercise, and when it builds up too much it leads to fatigue. Citrulline’s ability to remove this ammonia is the key reason why you’ll feel like SuperMan in the gym a few weeks after you start taking it. (2, 3)

Also, the widening of blood vessels creates an environment which allows more nutrients to be delivered to working muscles, leading to better performance under exertion.

So what does science say?

A 2010 study published in the Journal of Strength and Conditioning Research looked at the effectiveness of citrulline malate as a supplement for weightlifters. The researchers found that trainees who used CitMal were able to perform an average of one more rep per set on every set from the third set onwards. (4)

Holy f**k! Imagine getting an extra rep on almost every set you do from now on. Those potential gains are nuts!

To make things even better, the study also found that supplementing with citrulline resulted in a 40% decrease in muscle soreness, too.

Okay, this is where things go a little off track.

Supplement companies often hype up citrulline’s ability to increase our natural production of growth hormone, claiming that this is yet another way citrulline can help with muscle growth.

This isn’t true. Temporarily boosting growth hormone levels during a workout DOES NOT provide any muscle building benefits. (5)

L-CITRULLINE VS CITRULLINE MALATE: WHAT’S THE DIFFERENCE BETWEEN THE TWO?

Some supplements use citrulline malate, and others use l-citrulline, but which is better?

The answer depends on the type of training you’re doing.

As mentioned at the top of the article, citrulline malate consists of citrulline with an added malic acid molecule. Malic acid is a compound found in apples, and has been shown in studies to delay pain during intense exercise. It does this by impacting the Krebs cycle, which is responsible for converting food into energy (most notably the generation of ATP, which is the “money” our cells “spend” on intense exercise). (6, 7)

Some people believe that using citrulline in its “pure” form is superior to using CitMal, while others completely dismiss l-citrulline as a poor substitute for CitMal, so who is right?

Let’s take a look at what science says on this…

If your focus in on aerobic exercise and endurance training (i.e. cardio, such as running on a treadmill) then l-citrulline is your best bet. (8, 9)

However, while there are some useful studies documenting improvements to aerobic training capacity, on the whole I’d say research on l-citrulline supplementation is somewhat of a grey area, with some studies showing it has little to no effect on trainees. The most notable of these was a 2015 study from researchers at the University of Scranton, which gave trainees 6 grams of l-citrulline before performing a bench press to failure and also running on a treadmill to failure. They concluded that l-citrulline did not improve performance. By that, they mean it showed no increase to the number of reps per set, nor time to exhaustion, and vasodilation was not improved either. (10)

Meanwhile, research on citrulline malate is a heck of a lot more conclusive.

Earlier I showed you a study which found CitMal increases the number of reps per set and leads to faster recovery between sets during a chest workout. This wasn’t a “one off”. In 2015, researchers from Mississippi State University also discovered that giving trainees CitMal prior to exercise had a profound effect on their performance during lower body workouts. Each participant was given 8 grams of citrulline malate and performed a workout consisting of leg extensions, leg press, and hack squats. As the sets and reps went on, trainees who had taken CitMal were again able to perform more reps to failure than the other group. (11)

The same findings re-occurred AGAIN in a study published in the European Journal of Nutrition later the same year, this time citrulline malate helped increase the number of reps per set in a full body workout for a group of female trainees. (12)

When we raise the intensity of training (i.e. HIIT and/or weight training), it seems the malic acid molecule is the key reason CitMal is more effective than l-citrulline. This molecule appears to be able to help the body produce ATP faster.

If citrulline becomes arginine when it’s consumed, can we not cut out the middle man and just take arginine?

Interestingly, this isn’t as productive!

Bodybuilders used to take arginine in the late 1990’s and early 2000’s, but times change. When a 2002 study from Germany found that CitMal causes higher blood levels of arginine than using arginine directly, it raised a few eyebrows in the supplement industry. By the time these results were re-confirmed in 2009 when another study showed citrulline is 50% more potent for raising blood levels of arginine, it was game over for l-arginine. (13, 14)

It may become arginine once inside the body, but CitMal has a much greater absorption rate.

So although it probably sounds odd, using citrulline malate is actually a better way of getting the benefits of arginine than taking arginine itself!

It’s the rare instance of a remake being better than the original. In many ways, it’s like comparing the 1994 Arnold Schwarzenegger version of True Lies to the bang average 1991 original.

(If you didn’t know there was a 1991 original, then perhaps that does an even better job of illustrating the gulf in class between citrulline and arginine!)

This happens because the vast majority of arginine is destroyed by the liver and intestines as soon as it enters the body. One study suggests that as little as 1% reaches our muscle cells! (15)

Meanwhile, citrulline malate bypasses the liver and intestines entirely. In a 2012 study published in Medicine & Sport Science, a team of Spanish researchers confirmed that about 80% of citrulline makes it to the kidneys, where it is converted to arginine and sent to working muscles. (16)

Those are much better numbers to work with, right?

Unfortunately, many supplement companies STILL use arginine to this day, because it’s cheap as f**k and it still enables them to claim “increased endurance & pump!” on the packaging (technically it does this, just not very well), and they presume the general public won’t know the difference.

WHAT IS THE OPTIMAL DOSE OF CITRULLINE MALATE FOR MAXIMUM RESULTS?

Okay, so you’re sold on using a pre workout that contains citrulline malate. It’ll give you more endurance, faster recovery, and a great pump.

But how much do we need?

While the majority of studies use 6 grams and show decent results, note that the studies I’ve shown you today (which yield the absolute best results) all use a dose of 8 grams. So when you’re looking for a GREAT pre workout, look for one which gives you 8 grams of citrulline malate.

If possible, also look for one which also contains folic acid. This will increase the effectiveness of your citrulline malate dose even further, as it helps synthesize BH4, which sets the stage for greater nitric oxide production. (17)

So now you know the benefits of citrulline malate, this is where things get really crazy.

You see, despite the fact all the information I’ve given you today is readily available in the public domain, many supplement companies continue to under-dose this key ingredient, leading to ineffective preworkout supplements that aren’t worth the money.

For example, some major brands still use arginine despite the fact we know it’s a poor substitute:

Some use l-citrulline instead, so they’re better suited to aerobic training:

And some just brazenly hide the dose behing a proprietary blend. From experience, this means they’re massively under-dosed and don’t want you to see:

So to help you get hold of a pre workout that actually does the job, here’s a quick list of supplements that get it right:

That’s it! I hope you’ve enjoyed my handy guide to citrulline malate. Leave me a comment down below if you have any questions that aren’t covered here.