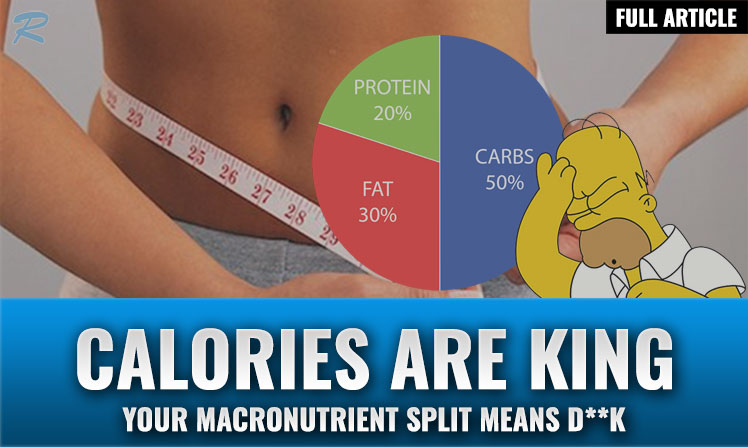 When it comes to building muscle and losing body fat, your macronutrient split isn’t really that important. Calories are king.

Whaaaaaat?! Back in the day, fitness magazines LOVED telling us we had to eat XX grams of protein, XX grams of carbs, and XX grams of fat?!

However, new research shows this is not the case and in today’s article I’m going to show you why…

First, let’s look at the law of themodynamics.

Eating too many CALORIES causes weight gain; regardless which macronutrient those calories consist of.

So let’s say a guy at your gym tells you “the best macros to build muscle are 300 grams of protein, 400 grams of carbohydrates, and 100 grams of fat.” When we convert those macronutrients into calories we have 3700 calories per day. If you don’t need that much food YOU WILL GAIN WEIGHT, even if you class your food choices as ‘healthy’.

This is not science fiction, it’s science fact. (1)

And here’s another thing…

Telling someone they must track every aspect of their diet dramatically increases the risk of overwhelm.

Have you ever had so many jobs to do on your day off from work that you just took a nap on the sofa instead? That’s overwhelm, and it’s a real diet killer.

You see, if someone has previously led an unhealthy lifestyle with lots of bad food choices, the WORST thing they can do is over-complicate things. Suddenly, instead of just trying to eat a bit less s**t, they’re stressing out about individual ingredients like salt and potassium, and convincing themselves that losing weight is too hard.

So I repeat: CALORIES ARE KING. Keep it simple. Keep it consistent. Now let’s look at some science on this.

So you might have a question for me right now…

How come every “expert” is saying certain foods cause belly fat, and certain macronutrients are directly related to Satan?

Sometimes these fools are simply uneducated on nutrition, but usually it comes down to the fact they’re trying to sell you a bunch of bulls**t diet plans based around cutting out certain foods and living on protein shakes.

Science is very clear on the fact that if we control total calories and ensure we eat enough protein to support muscle growth we can expect the same weight loss results regardless of the make-up of our macronutrients! (2, 3, 4, 5, 6, 7)

How much is enough protein? Research points to about 1g-1.2g per lb of body weight. (8)

So once you’ve accounted for that in your daily diet, you can ‘spend’ your remaining calories on more carbs and less fat, or more fat and less carbs, or moderate in both – it will not affect your end results!

But do you know what the WORST part is?

The part that’ll hit you in the face harder than opening the lid of a week-old protein shaker? The worst part is that THIS ISN’T NEW INFORMATION. The fitness industry has known this for YEARS, but there was too much money to be made in not telling you. See below.

The graph here shows the findings of a 1992 study published in the American Journal of Clinical Nutrition.

This study compared the effects of several isocaloric diets which consisted of 15% protein followed by a mixture of 15-85% carbohydrates and 0-70% fat.

The researchers were attempting to manipulate weight loss while keeping overall calories and protein the same, to see if there was an optimal macronutrient split to promote more muscle growth and more fat loss. Some participants ate low carb / hight fat, others ate moderate carb / moderate fat, and others ate high carb / low fat.

Guess what… there was no difference in weight loss results.

The researchers concluded that caloric restriction is the ultimate factor which determines weight loss results, not individual macronutrients. (2)

I’m not saying macronutrients are USELESS, of course.

Carbohydrates will give you more energy, and fat plays an important role in regulating testosterone and cortisol, so we certainly don’t want to make a sweeping statement like “Oh, you don’t need them!”

But what this shows us is that THE BEST DIET IS THE ONE YOU CAN STICK TO.

As long as you can remain consistent with your calories and protein, you can choose any style of dieting and see great weight loss results. Heck, you can even vary your approach as you go (if you’re more of a flexible dieter, then that’s very useful to know!).

It’s not the only study to confirm this, either…

The graph above shows the results of a 2005 from the University of Minnesota which doubled-down on the earlier findings.

Once again the researchers found controlling total calories and protein led to no significant differences in weight loss regardless of the make-up of other macronutrients. In fact, the net difference between the three groups in this study was less than 0.1kg! (6)

And the science keeps coming…

FIFTEEN YEARS after the original 1992 paper, the American Journal of Clinical Nutrition returned to this topic for another study.

So what happened here?

You KNOW what happened! There was no difference in weight loss results! (7)

IN CONCLUSION: CALORIES ARE KING!

Now that you’ve seen the research, it’s time to make a plan of action.

The reason most people fail with weight loss isn’t that they “don’t want it badly enough” (contrary to the memes), it’s because things often become too complicated and unsustainable.

Make no mistake, when I tell website members and clients that THE BEST DIET IS THE ONE YOU CAN STICK TO, I’m not doing it to be nice. I don’t get paid to be nice. I get paid to science the f**k out of things and show you how to get the best possible results in the gym.

This is how my clients diet. This is why they see results. Now apply these tips to your nutrition and watch your results take off.

Training programs are below.