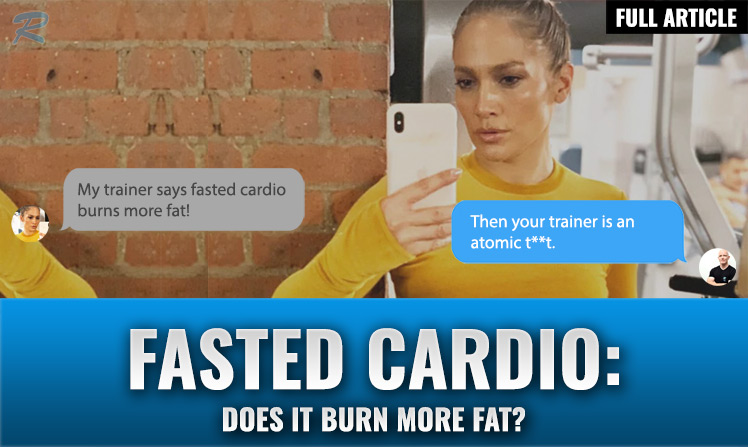 Jennifer Lopez’s trainer says it does, so case closed.

Not really, of course.

The belief that fasted cardio burns more fat stems all the way back to the 1980’s, but when J-Lo recently credited her early morning fasted cardio as “the secret behind her great body”, it caused it to resurface.

So this comprehensive article will look at the research of fasted cardio and fat loss to give you a difinitive answer once and for all: does fasted cardio burn more fat?

But first we have to deal with some flawed logic.

Given that J-Lo only recently started doing fasted cardio, this is obviously NOT the reason she’s in great shape. After all, as a former professional dancer, she’s been in shape for 25 f**king years.

Now that’s out of the way, let’s move on to the science behind fasted cardio.

WHY DO WE THINK FASTED CARDIO IS BETTER FOR FAT LOSS?

The theory behind fasted cardio is ROCK SOLID.

Our body burns carbohydrates for fuel, so by training early in the morning when there are very few carbs in our system, it has no choice but to use fat for fuel instead.

It makes perfect sense. Your body has got to give you something to work with, otherwise you’d fall down.

So we drag ourselves out of bed at F**k O’ Clock each day in the name of fat loss and start pounding the treadmill like an angry mam taking a faulty item back to the shop.

But is this how it actually works? Let’s find out.

WHAT DOES SCIENCE SAY ABOUT FASTED CARDIO AND FAT LOSS?

The theory above is incorrect, unforunately.

It turns out the human body is way smarter than we think.

A 2000 study published in the Journal of Applied Physiology discovered that performing fasted cardio causes no improvements in overall fat loss. It caused quite a stir at the time, because fasted cardio was still widely believed to be optimal for burning fat. (1)

However, since then we’ve had a mountain of new research re-confirming this.

One of the key studies to do so was Dr. Brad Schoenfeld’s huge meta-analysis on on the topic, which was published in the Journal of Strength and Conditioning Research in 2011. (2)

A meta-analysis involves researchers compiling the results of every study ever performed on a particular subject (in this case, the topic was fasted cardio), to see if they can form a general pattern with the results. It doubled-down on the previous research, stating that fasted cardio is NOT superior for fat loss.

It’s a conclusion the American Council of Exercise have since confirmed again, and studies in the last couple of years have re-confirmed, too. (3, 4)

It all comes down to energy balance.

I discuss energy balance in more depth in this post, but the crux of the matter is that being in a caloric deficit is BY FAR the most important factor in achieving weight loss – not which macronutrient we use for fuel during training.

Interestingly, it appears the body is capable of second-guessing us and adapting to its environment.

If you perform HIIT, it goes without saying that you should DEFINITELY grab some food prior to training. After all, HIIT literally relies on our carbohydrate stores and must be performed explosively. Doing HIIT without adequate fuel will lead to sub-maximal performance levels, and negate many of the results it offers. (5, 6)

There was a headline in 2019 that suggested “skipping breakfast before exercise is better for fat loss”. This study was so full of holes it could’ve doubled as a cheese grater. The participants who lost weight didn’t lose weight because they skipped breakfast and trained fasted… it was because they ate one less meal! Those calories were never replaced, so we had one group consuming less food than the other! Sadly, this poorly conducted study received a lot of media attention at the time, and misled a whole bunch of people. (7)

TAKE CELEBRITY ADVICE WITH A PINCH OF SALT

Celebrities often use different training methods to get in shape.

But the underlying key to their shape lies in consistency. After all, they’re just following the advice of those around them.

J-Lo likes fasted cardio. The Rock does, too. Meanwhile, Mark Wahlberg insists on training at 3:40 A.M. and Gwyneth Paltrow likes to shove rock diamonds up her hoo-haa.

It is what it is.