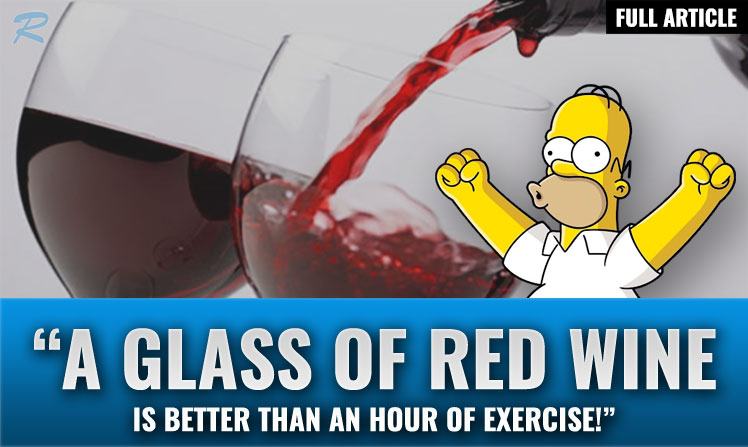 IS A GLASS OF RED WINE BETTER THAN AN HOUR OF EXERCISE…? OF COURSE IT’S F**KING NOT!

If the latest headlines are to be believed, a glass of red wine is better than an hour of exercise.

In this post I’ll be breaking down the research which led to these revelations.

Of course, if my readers know anything by now it’s to NEVER believe newspaper headlines. After all, these are the same publications which told you carbohydrates cause weight gain, and the same f**ks who gave Twilight a five star review.

Let’s get into it…

THE STUDY IN QUESTION

The study which caused the headlines came from a team of researchers at the University of Alberta.

They were testing the possible benefits of resveratrol for exercise performance.

So we had four groups of rats.

The study itself was actually really well conducted, but it took the media about five minutes to skew the findings and shout “Holy flaps! Drinking wine is better than going to the gym!” (link link link link link).

However, we can see from the results below that the participants who exercised outperformed the others, regardless of whether they used resveratrol. (1)

But what’s perhaps even more interesting about these results is that the group who used resveratrol alongside exercise yielded slightly great results than the group who exercised without it.

Maybe resveratrol does have some uses in the gym?

Hold your horses on that one, cowboy.

The amount of resveratrol used in the trial was 146mg per lb of body weight. When we adjust this for human subjects this would be 24mg per lb, so a woman weighing 130lbs would need 3120mg resveratrol to match the dose shown to be effective in this trial.

A glass of red wine contains between 4-7mg of resveratrol, so she would need to drink about 445 glasses – at which point she’d be in no fit state to hit the gym and would feel more at home sitting on a park bench next to Rab C. Nesbitt!

Don’t believe everything you read in the newspaper.

Resveratrol showed some positive indicators that it can be used to boost performance in the gym, and this study has at least got the ball rolling to see how we can tap into those benefits.

However, we don’t know how to get the most out of it yet so the headlines proclaiming “Wine O’ Clock” are utter bulls**t.