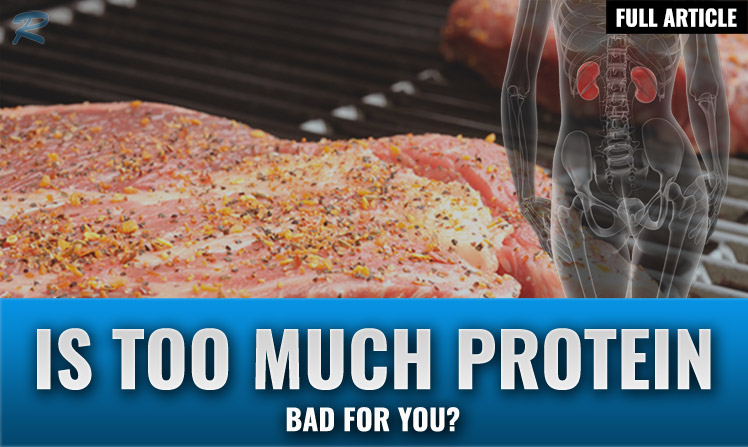 IS TOO MUCH PROTEIN BAD FOR YOU?

Is too much protein bad for you?

We all know someone who claims it IS, and this can be very concerning if you love to lift weights. After all, we need to eat protein to build muscle!

Plus, how much is classed as too much? And how far can we push it before the damage begins?

These are things I’m regularly asked by worried gym members, so this article will take a deep dive into the research on this topic and answer the key questions for you.

IS A HIGH PROTEIN DIET BAD FOR YOU?

In a nutshell, NO. Our kidneys are more than capable of handling a high protein diet.

So where does this belief come from?

Well, it dates back to a 1988 study from a team of German researchers, which discovered that a higher protein intake seemed to influence glomerular filtration rate (a marker for waste filtration in the kidneys), indicating that it placed the kidneys under more stress. Whenever this myth resurfaces in the press, they always point to this research as proof that too much protein is bad for you. (1)

However, it has been debunked several times in recent years.

When it first caught the headlines in the early 2000’s, a trial was performed at Harvard Medical School to determine the validity of the original findings. This time they found that increasing protein intake did NOT place the kidneys under more stress, nor did it raise glomerular filtration rate. (2)

So how can one study read entirely different to another?

Well, the key difference is that the participants in the second trial all had normal renal fuction. It appears this is the deciding factor in how your body responds to a high protein diet, because when performing the same tests with a group of people suffering from mild renal insufficiency, they found the higher protein intake DID cause issues.

Here’s what head researcher Eric Knight had to say:

So current scientific advice is that a high protein diet is perfectly safe unless you have pre-existing kidney issues. Interesting, huh?

“There’s no evidence to support the notion that a high protein diet will cause kidney damage in people who have normal functioning kidneys, but that doesn’t stop this myth from being incredibly popular!

In fact, I recently had an email conversation with a dietitian who believed it – a DIETITIAN! When I asked her to support her claim with scientific facts, she could not provide any evidence whatsoever.”

WHAT ABOUT BODYBUILDERS AND ATHLETES?

Even though the two studies above provide us with some useful information, they don’t answer ALL the questions we have.

After all, bodybuilders and athletes tend to eat MUCH more protein than the average person, so are there any studies which take this into consideration?

In fact, a trial published in the International Journal of Nutrition of Sport Nutrition and Exercise Metabolism looked directly at the effects of a high protein diet on the kidneys of bodybuilders and athletes.

For you folks reading this article, this research represents the ‘holy grail’ of answers for all of your questions.

They ran a series of tests on participants with a protein intake of 1.3 grams per lb (for a guy weighing 180lbs, that’s 234g protein per day). This is right in the so-called ‘sweet spot’ for muscle growth.

The results showed a higher protien intake had ZERO EFFECT on renal function. (3)

These are great findings, and should go a long way to laying any fears you had to rest… but we STILL have a few questions! Most importantly, are there any trials which look at the long-term effects of a high protein diet?

Of course there are.

This issue was laid to rest in 2016 by a team of researchers from Nova Southeastern University, Florida.

The participants in this 12 month long trial were a group of well-trained men, and they were instructed to follow their regular nutrition plan for the first six months, followed by a switch to a high protein diet.

This is a fantastic approach, as it gave the researchers a useful baseline to work with.

And what did the research tell us at the end of the trial?

You guessed it. There were NO negative side effects, nor kidney issues. (4)

“Sadly, the media and some ‘experts’ have misinformed the public that protein is dangerous for the kidneys.

Yes, if you have pre-existing kidney damage, a high protein diet may be less than ideal for your body. But for the rest of us? Our kidneys were designed for that very function, and they don’t become overburdened by it!”

Hopefully this article has helped lay to rest a few of the concerns you may have had regarding eating protein.

I encourage you to educate others with this information.

Unfortunately this myth seems to resurface every 4-5 years, and despite the overwhelming evidence, most people still believe it. But now you know better!

If you’ve enjoyed reading this artice, share it on social media. Bosh!