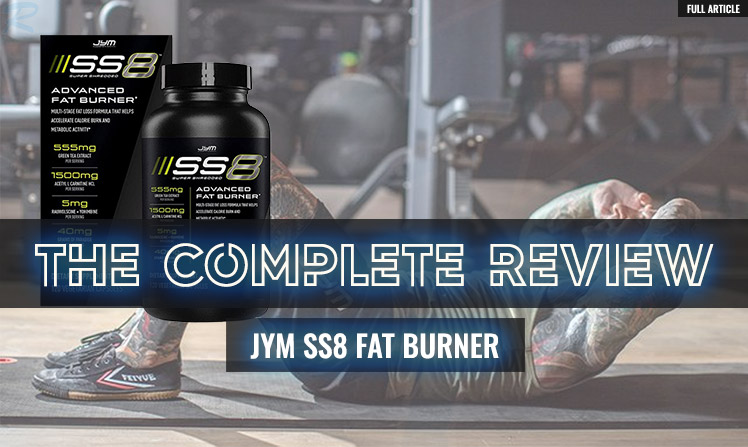 Most sequels are awful.

Jurassic Park… Star Wars… Princess Bride… I could go on.

And when supplement companies release sequels to their own products, it usually doesn’t bode well either.

Today I’ll be looking at the latest supplement to try this, as Dr. Jim Stoppani’s new new fat burner SS8 is reviewed and put through my deliberately harsh supplement rating system to decide whether it’s a worthy improvement on the original (Shred JYM).

Super Shredded 8 (SS8) claims to be “the best fat burner the industry has ever seen.” So are we looking at the supplement equivalent of Terminator 2? Or are Jym Supplement Science talking absolute s**t?

We’ll find out below, in my official Jym SS8 review!

SS8 IS THE FIRST JYM PRODUCT IN 5 YEARS?!

Jim Stoppani had a massive impact on the supplement industry when he launched JYM Supplement Science back in 2014.

There were already a few companies using fully dosed, non-proprietary blends in their products at the time, but JYM did it on such a massive stage that it made the whole industry sit up and take notice.

But the fact that Dr. Jim Stoppani used full clinical doses in most of his products had another benefit – unlike his competitors, he’s never really had to alter the original line-up of supplements since day one!

Super Shredded 8 marks the new JYM product in five years, and although Jim stated that SS8 would run alongside his original fat burner, Shred JYM, if we take one quick glance at the formula below we can see that SS8 will eventually replace Shred JYM.

The formula above shows us exactly what’s inside the new fat burner from JYM.

Check out this video of the doc explaining the formula, and then I’ll cut through the details…

Unfortunately, many of the claims made in this video are bulls**t.

Jim states that that SS8 is such an effective fat burner because it causes a much higher calorie burn caused by the caffeine in the product.

By including a massive 555mg in each serving, Jim has gone “all in” with this one. Science shows us that green tea extract doesn’t deserve it’s reputation as a so-called “fat burner. It is included in SS8 (like most other fat burners) due to the positive effects green tea extract can have on metabolism, leading to weight loss. However, a comprehensive 2009 study published in the European Journal of Clinical Nutrition showed that green tea has absolutely no effect on resting metabolic rate. (7, 8, 9, 10)

Green tea does have health benefits, for sure, but it’s not a fat burner. It’s also cheap as f**k, but I’ll get to that later.

Many of you who read my supplement reviews say this is your favorite part of each article, so enjoy.

This is where I go through all the main ingredients inside Super Shredded 8 and let you know what they do, and if the dose is sufficient to see results.

Let’s start with the main one.

The SS8 fat burner includes 300mg of ZumXR caffeine, as opposed to traditional caffeine anhydrous. This alternate form of caffeine is preferred for its extended release of energy, similar to TeaCrine. (16)

That means SS8 won’t give you an instant caffeine kick, but will instead spread a 300mg dose over 8 hours. Interesting, huh? ZumXR is a nice alternative to regular caffeine, but TeaCrine remains king (for now) because there’s more research to support it. (17, 18,19)

Here’s another ingredient I love.

This one works as a precursor to dopamine, meaning we can train harder. (25)

The combination of l-tyrosine and caffeine works for Super Shredded 8 in much the same way as the awesome AML Pre Workout, albeit the doses are much smaller in SS8.

Chromium is the next big trendy ingredient in the fat burner world.

That’s thanks to its links with appetite suppression, and specifically a reduction in carbohydrate cravings. This link is genuine, too, despite sounding too good to be true. (20)

But there are three very important things to remember with chromium…

If you’ve used a fat burner before, you’ll already know about Acetyl-L-Carnitine.

This ingredient was the fat burner of choice back in 1985, and has continued to thrive in the supplement industry despite being thoroughly debunked in the 1990’s. (21)

ALCAR (for short) does have a slight effect on fatigue, so could work as a “fat burner” by enabling you to train a little harder, but the difference is so small we’d consider this clutching at straws. (22)

Nowadays, ALCAR is typically added to pre workouts for its cognitive benefits, and we’d require a dose of 630mg-2500mg to see those. Jym SS8 falls right in the “sweet spot” for this, so you’ll unlock the “mental focus” benefits for sure. (23)

Green tea extract does NOT speed up your metabolism.

There. I said it.

There are studies which literally prove this. I’ve shown you them already. But supplement companies continue to push green tea extract as a “fat burner” due to the myth that it somehow has an effect on our metabolic rate. STOP IT.

Speaking of nonsense, I bring you cayenne pepper.

Spicy foods are often labelled as fat burners for their ability to increase the thermic effect of food, but what they don’t tell you is that we’d need to eat A LOT OF IT to see a noticeable spike in results.

This is Dr. Stoppani’s own patented form of yohimbine.

Some people are sensitive to yohimbine, so the addition of a slightly more potent form might make you unleash holy hell on the toilet. SS8 provides us with 5mg, but fat loss benefits have only been seen in doses of around 0.2mg per kg body weight (that’s 14mg or a 150lb person, 18mg for a 200lb person, and 22mg for a 250lb person)

I can’t review SS8 without comparing it to Shred JYM…

Heck, any JYM fans reading this are likely wondering what the difference is between the two anyway.

So if you take a look above you’ll see that Super Shredded 8 Fat Burner is basically a charged up version of the original Shred Jym, with many of the same ingredients.

The form of caffeine has been changed (as mentioned above) and increased from 200mg to 300mg. Green tea extract increases from 500mg in Shred JYM to 555mg in SS8 (has the exact same dose of “active” compounds, though). Synephrine is removed entirely, and we have the inclusion of AdrenaJYM.

Oh, and then there’s the new price…

Welcome to the real world, folks.

When asked about the price hike, Jim told one Facebook commenter that it comes down to the extra quality of the advanced ingredients in SS8, and the fact that it was created exclusively to get results alongside his popular Super Shredded 8 workout program.

I’m a big fan of this particular program, it’s fun to do – but please don’t be fooled that a fat burner is what’s getting you results with that. If you see results with that program it’s because you’re performing A LOT of cardio and the accompanying low carb diet has you drop your food intake by about 700 calories per day from start to finish. It’s calories in versus calories out, nothing more.

Super Shredded 8 succeeds in its mission to become “the best fat burner on the market”, because the ingredient profile is head and shoulders above anything else in its class. However, in a supplement category which is so tainted by pseudoscience and absolute bulls**t, is that even a compliment? It’s kinda like being voted “best Twilight movie”.