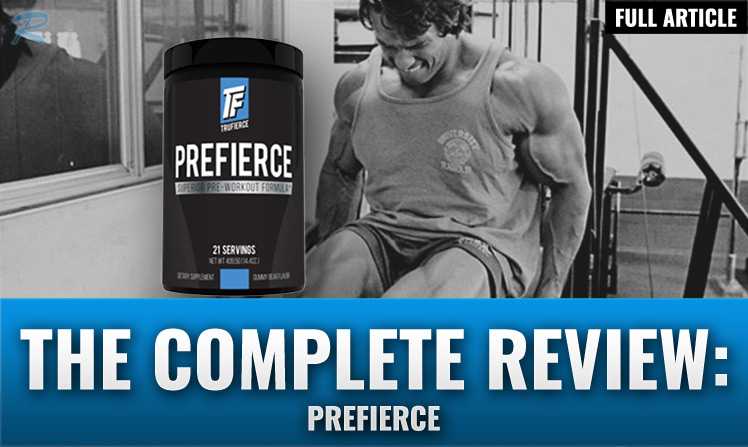 As a general rule, you’ll go through 50 poor pre workout supplements before you find a GREAT one.

Today, I’m going to introduce you to “the one”.

PreFierce is the brand new product from US manufacturers TruFierce Nutrition, and it claims to be “the future of pre workout supplements”.

But today PreFierce comes up against the toughest challenge it’s ever faced – it’ll be put through my deliberately harsh supplement rating system, as my official review determines whether it really is as good as it claims to be. As always, my reviews are completely unbiased. They have a reputation for being harsh, and that’s what you’ll see here in my official PreFierce pre workout review – no holds barred, research-backed facts, that’s why you read my s**t.

You know what’s interesting about making a great pre workout?

In fact, the more we add the less efficient it becomes. I’m sure you’ve seen those products which claim to have “27 active ingredients”, etc. With so much going on in the scoop, ingredients end up clashing or are grossly under-dosed to the point where they’re completely ineffective.

There are a handful of pre workout ingredients which stand head and shoulders above everything else, and by stripping back the bulls**t and focusing ONLY on what works, a product can become 10x more effective.

In many regards, it’s like making a good shark movie. All that nonsense where Great Whites fall out of the sky with rocket launchers on their backs is moronic, but when a good director cuts it down to the bare essentials it’s f**king terrifying.

See the guys who made Australian shark movie The Reef?

So how does the advice above apply to PreFierce?

By sticking to full clinical doses of the proven essentials, TruFierce Nutrition have ensured their very first attempt at a pre workout is a product which leaves the majority of bigger supplement brands for dead.

There’s a LOT going on inside this simple-looking black tub, and most of it is great.

A 250mg dose of caffeine is enough to give you a kick up the butt prior to training, and TruFierce have taken the extra step of bringing in 250mg l-theanine alongside it to offset any “caffeine crash”. This means you won’t wake up face-down in a dumpster four hours after training with an empty donut wrapper stuck to the side of your face.

But then we get to the REALLY good stuff…

A mighty 7 grams of citrulline malate is the MVP of PreFierce. This will provide you with some truly monstrous pumps, alongside gradual improvements to your endurance and intra-set recovery speed with continued usage.

Betaine is up next, and I’m pleased to announce that PreFierce joins the very small list of pre-workout supplements who take this ingredient seriously enough to include a full clinical dose of 2.5 grams. I’m a huge fan of betaine, especially when it’s featured alongside beta-alanine. A full dose of beta-alanine is 3.2 grams, but TruFierce Nutrition goes even higher at 3.5g. Get ready for some face tingles.

It’s clear these guys have NOT entered the supplement game to be cannon fodder for the bigger companies. They’ve built a pre workout fit to challenge the top dogs, and credit to them!

Another good point comes in the ingredients which are left out of the formula.

You won’t find taurine or BCAAs in PreFierce, and that’s awesome. I’m forever calling out supplement companies for throwing these ingredients into their products just so they can make claims of “focus” and “endurance” when they simply DO NOT WORK. Mounting scientific literature shows that both taurine and BCAAs can even be counterproductive to performance when taken before exercise, so TruFierce Nutrition join the select list of companies to get it 100% spot on!

No supplement is PERFECT, of course.

In terms of bad points, I’ve gotta mention the name. TruFierce Nutrition PreFierce Pre Workout. Who the f**k came up with this?! You need a sip of pre workout just to pronounce it!

With regards to the actual formula, they’ve included a so-called “fat burning blend” alongside the ingredients mentioned above. I despise these blends because they’re simply thrown in so the company can make claims of “fat burning” to make the product more marketable but, in truth, it’ll do very little.

This “fat burning blend” contains green tea extract, black pepper extract and acetyl l-carnitine, and regardless how much TrueFierce Nutrition shout about the supposed fat burning benefits of these ingredients on their sales page, the actual research doesn’t support the claims being made.

They also claim green tea leaf extract can work as a pump-enhancing nitric oxide booster, but there’s no evidence to support this claim.

One final negative – there’s no no acetyl l-tyrosine or potassium citrate.

Very few products include potassium citrate (although they really should!) so perhaps I’m being too harsh, but that is my job. The dopamine-enhancing capabilities of acetyl l-tyrosine would have worked very nicely alongside caffeine, and potassium citrate is wonderful for its hydration benefits. The inclusion of both ingredients could perhaps elevate PreFierce to the very top of the pre workout market.

All things considered, though, the good far outweighs the bad!

I know that a lot of you guys who read my supplement reviews consider the “Ingredient Breakdown” section your favorite.

I’m a complete fitness nerd, so this is the section where I run through all the main ingredients of PreFierce and show you precisely what each of them does, and see if the dose sufficient.

Let’s start with the main event…

Citrulline malate is the most important ingredient in your pre workout if you want to build muscle.

It doesn’t get the same hype as creatine, or whey protein, but every serious athlete knows how important citrulline malate is to performance.

It works by widening the blood vessels to allow a greater delivery of nutrients to working muscles. In doing so, you unlock the ability to train at peak levels for longer.

During a 2010 study published in the Journal of Strength and Conditioning Research, participants who used CitMal were able to perform an average of one more rep on every set of their workout. Imagine being able to perform an extra rep on EVERY SET you do. Those kind of results mount up real fast! (1)

Supplement manufacturers have known about these benefits for nearly 20 years, but it was originally very difficult to fully unlock them. They used to use arginine back in the day (remember to all those “N.O. Boosters” back in the 2000’s?), but now we use citrulline malate because it’s over 50% more effective. (2, 3, 4)

A full serving of citrulline malate (like the one used in this product) will improve several aspects of your training – better pumps, faster recovery between sets, greater endurance!

If you don’t like your face I’ve got some goo news for you.

You probably won’t be able to feel it after drinking this motherf**ker.

Beta-alanine is best-known for the tingly, skin-crawling effect it gives us when we first start taking it. With a monstrous serving of 3.5 grams, only the toughest of gym-goers will be able to resist pulling a classic Stallone face.

But beyond the parasthesia (science name for wanting to rip your own eyes out), beta-alanine has some impressive benefits to weight training. Most notably is it’s ability to buffer the build-up of waste products around muscles as they work. This means you’ll be able to push through “the burn” (in true Sly style!) for longer. (5)

A full clinical dose is 3.2g, which can be taken at once or split into two halves throughout the day. TruFierce Nutrition ain’t messing around with any of that bulls**t, heaping a massive 3.5g beta-alanine into every scoop. Sink or swim!

Betaine is the unsung hero of a good pre workout.

It’s been gaining notoriety in the track & field world over the last 10 years, and thankfully it’s beginning to find its way into more products, but PreFierce is still in the minority by being one of the few pre’s to give a full clinical dose.

Once again it will make improvements to your training endurance, as well as muscle recovery speed and explosive strength. Sprinters and cyclists have been using betaine for years, and it makes sense to see those benefits transfer over to the weights room. (6, 7, 8, 9)

Caffeine is part and parcel of almost every pre workout on the planet.

There is so much research backing up the effectiveness of caffeine, it’s been linked to improved mental focus, increased energy output, and even gains in explosive strength. (10, 11, 12, 13, 14, 15)

But does PreFierce provide enough of it to yield such results?

That’s not necessarily a bad thing, though, as 400mg would be too brutal for most people to handle in one go, and very few pre workouts go to that level (this is the best of the bunch that do).

Most people should be able to handle the 250mg dose of caffeine in PreFierce just fine.

However, TruFierce Nutrition have taken no chances – they’ve included a 250mg dose of l-theanine alongside it. L-Theanine is great for offsetting the common “caffeine crash”, although it’s usually only needed for doses above the 250mg threshold.

The key difference between TruFierce Nutrition and most other supplement companies who include this ingredient is that they get the dose right! They’ve included a perfect 1:1 ratio of caffeine to l-theanine. This is the same ratio which studies show to be most effective. TruFierce Nutrition have excelled here.

Here’s where things go off track.

The inclusion of these ingredients will mean TruFierce Nutrition can exploit industry loopholes to use the words “fat loss” in their marketing of PreFierce, opening it up to a wider audience. But in terms of actual fat loss, these won’t do Jack.

In fact, you could remove them entirely from PreFierce today and the product would be better, not worse.

They offer some health benefits, but none of them need to be taken prior to training and they certainly won’t add anything to your session. Its literally just a marketing gimmick. So the one piece of information I’d like to to take away from this section is that, despite these ingredients often being billed as fat burners, science clearly shows they are NOT fat burners. (17, 18, 19, 20, 21, 22)

TruFierce Nutrition deserve all the plaudits they get for this.

PreFierce is not only a very good pre workout, it quite easily smashes a lot of big-name competitors. It even reached #6 on my list of the 10 best pre workouts of 2020. That puts them at the top end of a very competitive market, and it’ll be interesting to see them grow in the years to come.

And grow they should.

By not including any untested exotic stimulants in the formula, they’ve ensured that PreFierce will never get flagged or have to make unnecessary label changes, and the handy bulk-purchasing options on their website are a decent idea, too!

This is a top pre workout. Everything in PreFierce is dosed correctly, and there is no clutter. I’m a big fan. It receives a very nice 4 star review from me.