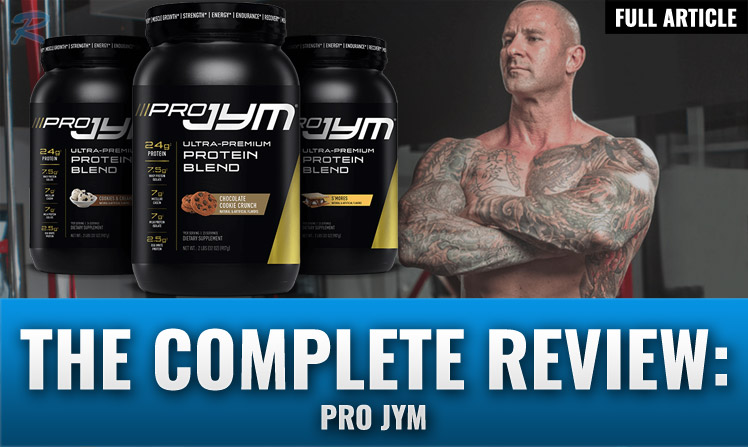 When Pro JYM was released in 2015 it quickly became the world’s #1 selling whey protein powder.

The level of trust placed in Dr. Jim Stoppani’s supplement knowledge was such that it eased past competitors and became the new undisputed champion.

Today we will find out, because my official Pro JYM review will break down every aspect of JYM’s flagship whey protein to decide if it’s still on top of the world.

(FYI: No product has ever got a 5 star review, maybe this will be the first.)

THE CRAZY STORY OF PRO JYM

I know you guys like how unbiased and in-depth my reviews are, so I’ve got a real treat for you today!

You see, Pro JYM has had a storied history so far.

When Jim Stoppani launched the brand in 2013, he literally changed the supplement game forever. Featuring regularly in Muscle & Fitness magazine, he built a reputation as a reliable source of information for anything supplement-related (heck, I’d probably have let him bang my girlfriend if he’d said it would improve my barbell squat!). So it made perfect sense when the mighty Bodybuilding.com saw an opportunity to partner with Jim Stoppani and create a supplement brand with his name on it.

The first release was Pre JYM, which still stands as a top pre workout even now, and this was quickly followed by Pro JYM.

But shortly after the release of Pro JYM the following year, things started to get very messy…

First, it was suggested in an article from PricePlow that Dr. Jim Stoppani didn’t even formulate Pro JYM, and that Bodybuilding.com had simply re-packaged their old Protogen whey protein shake with a new name and an image of the doc, then bumped the price up.

“Strange, right? It’s like someone took the formula for Protogen, lowered some of the doses, then increased the price to create Pro JYM!”

This sounds crazy at first – until you take a look at the labels:

Shortly after the release of Pro JYM, it was hailed as “the only whey protein supplement in the world which doesn’t use a proprietary blend.”

Dr. Stoppani has been very keen to repeat this claim over the years:

“When I tell people that Pro JYM is the only non-proprietary protein powder blend available today, some state that a few other companies are already doing what I am doing.

A few other companies are listing the percent of each type of protein that is in their protein blend. For example, a protein powder blend that is whey, casein, and egg protein might list that it’s comprised of 40% whey, 40% casein, and 20% egg protein… but that is NOT listing the exact amount of each one of those proteins!

Oh my goodness. Where do I start with this?

Let’s begin by taking a look at the nutrition label for Pro JYM.

The label is quite transparent, and it does indeed list the amount of most major ingredients in the formula, but not all of them. Don’t get me wrong – I’ve seen a LOT worse, but this is still technically a proprietary blend.

Also, I f**king hate it when supplement brands badmouth other brands for no other reason than self-promotion.

So let me jump to the defence of every other company in the fitness world right now by pointing out that there are definitely companies who do not use proprietary blends. Jim is talking absolute s**t when he claims Pro JYM is the only one.

NutraBio are a good example. They’ve been around since 1996 and have been releasing very high quality products with no proprietary blends. In fact, the labels are even more transparent than those of JYM.

When one of Jim’s own followers pulled him up on this claim, the doc published this absurdly silly video (below) in which he actually doubles down on his belief that Pro JYM is the only product without a proprietary blend (despite being proven wrong), and then claimed that nobody even cares if smaller companies are doing it because… well… they don’t matter.

But wait… it gets even better.

The unprovoked attack from Jim resulted in one of the most beautiful comebacks in YouTube history, when well-respected NutraBio owner Mark Glazier decided he’d heard enough…

(WARNING: If you watch the video below, you’ll want to buy NutraBio, not JYM.)

As if we needed things to get any crazier, Jim and Bodybuilding.com then had a huge public disagreement about who the actual owner of JYM Supplement Science was, and eventually Dr. Stoppani relaunched the entire brand with GNC. The row lasted nearly 18 months, before JYM once again returned to Bodybuilding.com.

As you can see, it’s been a bumpy ride so far for JYM!

I hope the craziness above made for some entertaining reading. It took me f**king ages.

So how does Pro JYM stack up?

Well, a serving of Pro JYM provides us with:

The amount of protein in each scoop is great.

A 2009 trial published in the American Journal of Clinical Nutrition found that a serving size of 20 grams of protein creates almost as much of an anabolic spike as a dose twice the size, so the serving size here falls right into the “sweet spot” for muscle growth. (1)

But one thing which isn’t so great is the protein-per-serving ratio.

For such an expensive shake, that’s LOW AS F**K.

The rest of the scoop consists of 7g carbohydrates, 3g fat, and a f**k-tonne of sweeteners and thickeners which have been added to improve the taste – and fair play to them, it is delicious!

When we dig into the formula of Pro JYM we can see there is no whey protein concentrate.

Whey protein concentrate is a popular ingredient, but if you’ve ever experienced issues with lactose you’ll appreciate the fact that Pro JYM opts for whey protein isolate instead.

You can also avoid the lactose issues of WPC by switching to a a higher grade of whey protein concentrate, but isolate is even better.

Pro JYM contains a blend of whey protein isolate, casein, and egg. This is great! By using a protein blend you will have a slower release of amino acids for your muscles to gobble up over the course of the day, and studies suggest this is slightly more effective for muscle growth versus using whey alone. (2, 3)

This solid formula and the inclusion of whey protein isolate is a key factor in cementing Pro JYM as a “premium” protein powder. It’s well known that whey protein concentrate is dirt cheap, and most companies often stuff it in over 90% of their so-called “blend”. For instance, if we compared the formula of Pro JYM vs Gold Standard, or Pro JYM vs Nitro Tech, we can see there is a BIG difference in quality thanks to this blend.

As my Pro JYM review comes to an end, I must deliver a score…

In summary, I consider Pro JYM to be a pretty solid whey protein supplement. It even made it onto my list of the top 5 whey protein supplements of the year, so credit where it’s due. Dr. Jim Stoppani has created a great blend consisting of fast-release, slow-release, and even-slower-release protein sources which is great for building muscle and tastes like a milkshake!

However, Pro JYM won’t dominate the industry in this decade the way it did the last.

In fact, there are other companies who have already released superior products.

(Not to stir the pot, but NutraBio Muscle Matrix has a superior formula AND a higher protein-per-serving ratio – whoops!)

Pro JYM gets a good 3 star rating from me.