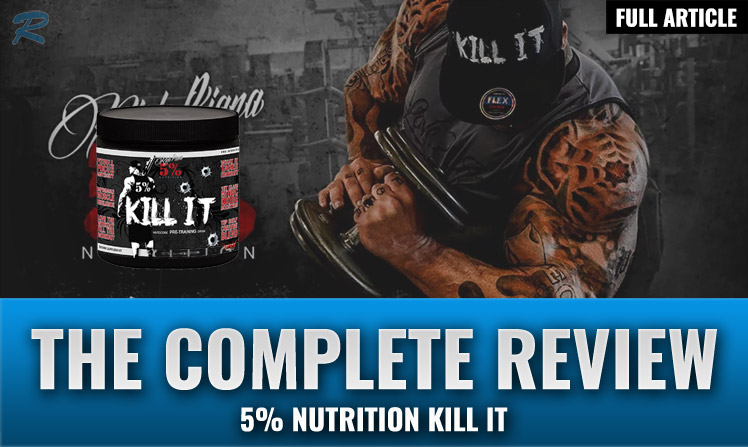 You either loved Rich Piana or you hated him.

He was one of the bodybuilding scene’s few polarizing celebrities, his over the top personality often overshadowing his impressive business accomplishments.

Kill It is the flagship pre workout from his supplement brand 5% Nutrition, and I’ll be putting it through my deliberately harsh supplement rating system to judge whether it can live up to huge expectations of Rich Piana’s fanbase.

No product has ever received a 5 star review from me. Will this be the first?

KILL IT REVIEW – DOES IT LIVE UP TO THE HYPE?

In all honesty, supplements from famous YouTubers have a reputation for being poor.

However, this trend was bucked by CT Fletcher in 2016 when he released his stellar line of products and, interestingly, Rich Piana carried a lot of the same hallmarks, which bodes well for 5% Nutrition.

His open discussions about steroid abuse often landed him in hot water, but there is no denying the man’s work ethic. He networked his way through the bodybuilding scene and forced his supplements into gyms all over the country, and that work ethic is referenced in the brand name. Most people falsely believe 5% Nutrition is a boast about low body fat, but it actually comes from Piana’s belief that “only 5% of the world’s population have the drive to do whatever it takes to succeed.”

So what’s the problem?

Well, the ingredients just aren’t there.

Aside from a nice 250mg serving of caffeine, every other key ingredient is UNDER-DOSED (citrulline malate, beta-alanine, creatine).

Also, many of the key ingredients are hidden behind a proprietary blend, meaning they’ve hidden the dose used in the product. This is a bad thing, because it almost certainly means the product is severely under-dosed and the company are trying to get away with not showing it.

This is a shame, because 5% Nutrition could’ve had a real winner on their hands here.

Heck, they even used a tried and tested approach with the marketing (cover your pre workout in hype about ‘sleeve busting pumps’ and make sure the name could double up as a movie title on SyFy…), because if ‘Amino Energy’ doesn’t make you want to smash the iron, then ‘Mega Quake’ or ‘Atomic Face Punch’ surely does.

But even that’s not enough to save Kill It.

This is where we put Kill It under the microscope to look at each ingredient used in the formula.

You’ll learn what each ingredient is capable of doing, whether the dose is sufficient to yield results, and so on.

Let’s start with a biggie.

Inside the so-called “endurance blend” of Kill It, we can see a few familiar ingredients.

This blend is the real engine of the product, as it includes caffeine, beta-alanine and citrulline malate.

But therein lies the problem.

Given that the total size of this blend is just 7.4 grams, we KNOW ingredients have been under-dosed. After all, a clinical dose of citmal is 6 grams, and beta-alanine is 3.2 grams. Thanks to the folks at PricePlow I have been able to determine that the dose of citrulline malate is 3 GRAMS, half the clinical dose.

Agmatine sulfate comes in at 750mg, but despite often being touted for it’s ability to increase muscle pumps during training, it’s been shown in trials to be completely ineffective at doing so. Potassium citrate is included for its ability to increase cell volumization, and it’s an excellent ingredient, but at just 42mg you won’t see those benefits.

Given that this adds up to a total of 3.79 grams, there’s a slight chance we could see a full clinical dose of beta-alanine – but I wouldn’t count on it!

The fact that they’ve included taurine really p**ses me off. Taurine is a known antagonist of caffeine, and given that caffeine is the ONLY ingredient which has been correctly dosed here, it’s like kicking the product in its one good leg. (2)

For a product which has trouble getting the basics right, unnecessarily complicating the creatine formula is a ROOKIE MISTAKE.

So it makes very little sense for 5% Nutrition to ditch this type of creatine in favor of the completely untested combination of magnesium chelate creatine, tri-creatine malate, and creatine pyruvate.

They try to claim these newer, flashier creatine blends are SUPERIOR to the original, but the only difference is the f**king price. (1)

This is a B vitamin which, like taurine, does not deserve a place in your pre workout.

However, it’s often thrown into formulas because it creates a similar tingling sensation to that of beta-alanine – allowing manufacturers to ‘mask’ the fact that a supplement may be under-dosed in beta-alanine.

But unlike the ingredient it’s trying to replicate, niacin won’t provide you with any training benefits at all. It’s purely superficial and shouldn’t be here.

KILL IT REVIEW – THE FINAL VERDICT

I wanted to love this product so much, but I can’t.

Despite the aggressive statements all over the tub, Kill It just cannot compete against industry leading pre workouts like AML Pre Workout.

At about £33 for a thirty serving tub, you’re essentially buying an overpriced energy drink.

If you’re after a pre workout that does a far superior job on a budget, opt for something like Redcon1 Total War instead.