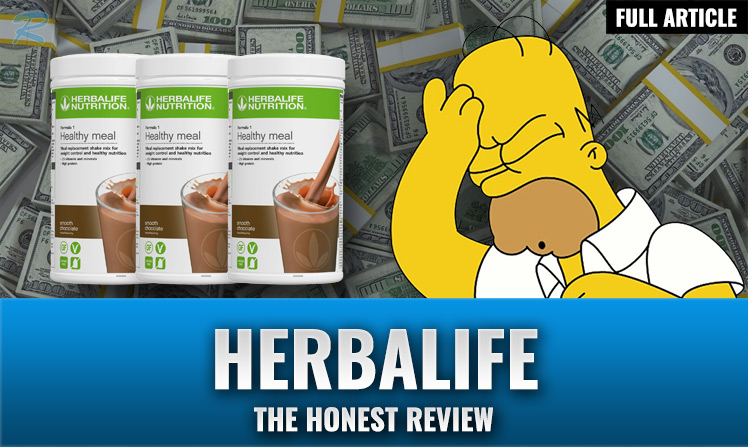 Ever been approached by a Herbalife rep?

There’s nothing more annoying than receiving a message from someone you’ve never spoken to since they bullied you in school offering you “the chance to live your dream life, hun”.

Worse still, they’re harder to shake off than a bit of s**t on a stick, with all their #askmehow bulls**t.

But putting aside the annoying sales tactics, are Herbalife products any good? And what about the home business side of it? Is it genuinely worth getting involved in, or is this company one big rip off?

In this review we will be focusing on their Formula 1 Meal Replacement Shake and Personalised Protein Powder – Formula 3 (catchy names, huh?), as these appear to be the company’s flagship products.

If you’ve ever searched for answers on Google you’ll know that most Herbalife reviews are just well-disguised sales pitches, so discovering FACTS can prove troublesome… and that’s exactly why I’ve written this in-depth review.

As always, my reviews are completely impartial (and quite often brutal). I’m going to give you my honest opinion on Herbalife products, and the business as a whole. What you do with that opinion is your choice.

As you can probably tell, this review isn’t going to be very nice. We’re not dealing with top of the line products here. I mean, you don’t get fined $17.5 million by the Federal Trade Commission for being awesome, do you?

Uh oh… there’s lots of red highlights in that picture.

Before we even get to the formula, the first mistake is in the product name. You see, shakes were never designed to replace meals.

Formula 1 is their pioneering (their words, not mine) meal replacement shake which promises us it contains a high quality source of protein and all the nutrients our body needs, all backed by science.

Before we move on, let’s fact check that motherf**ker…

(Yes, sales reps, you’re gonna f**king hate this article, because I will not let you get away with your s**t.)

According to the sales pitch, these are all the nutrients we need in a healthy meal. First off, 221 calories is not a meal. If you had three of these per day that’s only 663 calories, which isn’t healthy at all. Also, with 97% of its carbohydrates coming in the form of pure sugar, you should give this a hard pass.

Herbalife claims Formula 1 contains the optimal amount of protein to promote muscle growth, too, but this isn’t true. The optimal amount appears to be a little higher, at 20 grams, as shown in a 2009 study published in the American Journal of Clinical Nutrition. (1)

And then the suck gets worse…

The company states that users who want to lose weight should consume two of these shakes per day alongside one balanced meal. Let’s put this advice to the test. If I make my balanced meal a large baked potato with tuna, this would give me a total daily food intake of:

Living on this amount of calories would be NUTS if you were also exercising – and hold up, because that’s EXACTLY what they tell us to do next!

The sales page advises us to head out to the gym and use these “protein-rich” shakes to build muscle. But as you can see in the figures above, the user would be getting nowhere near enough protein per day to support their training!

A meta-analysis published in the British Journal of Sports Medicine back in 2018 found that we need around 1 gram of protein per pound of body weight to stimulate muscle protein synthesis, and we can aim as high as 1.18 grams per lb to maximize it. (2, 3)

That would mean a 180lb per son would require somewhere between 180g-216g protein per day, not 62 grams. With those numbers, the only way you could hit your protein target would be to make your “one balanced meal” a f**king horse.

Also, the carbohydrate content of those diet recommendations is so low we’d lose water weight in the first couple of weeks, making the user think “Ooh, it’s working!” before they hit a frustrating brick wall and eat the fridge. Finally, fat intake should be around 0.5 grams per lb of body weight to support hormones which help in the muscle building process, which would be 90g for a 180lb person.

So yeah, the product is poor and the advice they give is even worse.

And then there’s the price…

Remember, these are bottom of the range ingredients with a poor macronutrient breakdown. For that price, you could pick up a far better whey protein shake.

Let’s move on to the other product in today’s review.

Formula 3 Personalised Protein Powder is Herbalife’s most popular whey protein supplement. It takes all of the stuff from the product above and somehow manages to make things worse. It does that by getting our hopes up then dashing them.

The nutritional breakdown of the product is as follows:

That’s a pretty decent amount of protein per serving. I’m happy with that. But don’t celebrate just yet…

While this is certainly better than the mouthful of sugar in each serving of their meal replacement shake, we once again find ourselves paying a lot of money for dirt cheap ingredients!

In Formula 3 we get a proprietary blend of soy protein isolate and whey protein concentrate. And despite the label’s misleading claim that the tub contains 40 servings in your tub, if you read the fine print you can see they class one serving as just 6 grams, then tell you to have four servings in each shake. So the real size of each serving is 24 grams, meaning your £23,18 tub only contains TEN F**KING SHAKES!

That’s right, two shakes a day and your tub will expire in just five days!

That’s a whopping £2.31 per shake, for ingredients which would have cost pennies to formulate. I’ll explain why Herbalife charge so much later on, because we’re just getting to the good bit, but I’ll finish this section by saying you could pick up many superior products with better formulas for a much lower price.

SO WHY IS HERBALIFE SO POPULAR?

As you can see above, there’s nothing special about Herbalife products.

And you won’t find any of them on the shelves of your local supermarket or supplement retailer, either. You have to buy it from a sales rep. Which begs the question; how is a meal replacement shake company from the 1980’s so popular nearly forty years later?

The answer is excellent marketing.

Herbalife were one of the first nutrition companies to hop on board the social media bandwagon, and it paid off.

By encouraging social media influencers to sell their products to their ready-made audiences, Herbalife taps into a huge market of people who want quick results for very little effort.

They also sponsor L.A. Galaxy in the MLS, and have sportsmen like Cristiano Ronaldo posing with their tubs. These associations don’t come cheap, so how do they afford it?

“Hey hun, hope you‘re doing great? I just wanted to let you know about this amazing opportunity! You get to look great, feet great, and even be your own boss. ASK ME HOW.”

You see, Herbalife provides their distributors a with rather neat pyramid scheme “home based business opportunity” which allows them to earn money for signing up other people.

That’s the real reason behind those greatly inflated prices, because commissions need to be paid. And the massive profits the company makes from the countless unsuccessful business ventures of their hopeful bulk-buying sales vendors makes it very easy for Herbalife to go to such lengths with their marketing efforts.

Also, that #dreamlife isn’t as great as it’s being made out ot be.

In 2012, investor Bill Ackman accused Herbalife of being “the best managed pyramid scheme in the world”, claiming that the company deliberately misleads sales reps to believe they can all become millionaires by selling their products door-to-door.

And Bill went all in…

This led to Herbalife being investigated by the Federal Trade Commission in 2014, and they ruled that the company had acted unfairly and cheated hopeful salespeople out of hundreds of millions of pounds via it’s multi-level marketing earning system.

Herbalife was fined $17.5 million, and the drama didn’t stop there…

Two yers later, the FTC forced Herbalife to restructure its operations and ordered them to pay a whopping $200 MILLION ($200,000,000!!!) to customers who lost money due to deliberately deceptive behavior.

The FTC also exposed Herbalife for boasting in a series of videos, brochures and team meetings about sales reps supposedly earning thousands of dollars per month, quitting their jobs, and leading lavish lifestyles – but half of their so-called “sales leaders” actually made less than $5 per month from selling products.

In their desperation to make money, struggling sales reps do really silly things.

Let’s go back to those celebrity endorsement deals…

Check out the widely shared meme below, which appears to claim that Cristiano Ronaldo got into shape because of Herbalife.

Ronaldo is a world class athlete who has always been in great shape. They’ve used a so-called ‘before’ picture with poor lighting (he’s clearly still in good shape), and an ‘after’ picture which was actually taken in 2013 – before he signed a sponsorship deal with Herbalife!

You couldn’t make this s**t up!

So how does Herbalife stem this tide?

After all, surely they’ll want to stop an army of unqualified f**knuckles suddenly calling themselves “weight loss coaches”, sharing fake transformation photos, and giving potentially dangerous nutrition advice to their followers just so they can make money from them?

Not to worry. Herbalife have got it covered.

Basically they take no responsibility for any of it.

Why did the Federal Trade Commission stop short of calling Herbalife a pyramid scheme when they were handing out those crazy fines?

Many reporters believed the prohibiting of the dreaded “P word”, which could’ve killed the business, was part of the $200 million settlement agreement with the FTC.

When questioned, here’s their hilarious response:

I could end this here, because I think you’ve seen enough to make a good judgement call, but I kinda want to go further because it’s fun, so….

A year later, Herbalife was the topic of a popular documentary called Betting On Zero. The film-makers openly accused the company of “building an empire on the hollow promise that sellers of their protein shakes could all become rich.”

This time Herbalife was sued for $1 billion. The reason? You guessed it, continuing with their f**king get rich quick f**king bulls**t. The plaintiffs in this case were two former sales reps, Patricia and Jeff Rogers, who had this to say:

But I did promise you an impartial and brutal review, and that’s exactly what I’ve delivered.

In terms of supplements, Herbalife produce poorly formulated, greatly overpriced products. This is made worse by the fact that anyone can sign up in a bid to make money then freely dish out silly nutritional advice without consequence. That double-whammy is a recipe for disaster which puts the general public in great danger from the bad advice being handed out by motherf**kers looking to make a quick buck.

Before I end this, I must point out that Herbalife aren’t alone in this type of marketing. Juice Plus, Shakeology, and Isagenix use the same approach to name but a few.

So repeat after me…

Selling weight loss shakes does NOT make you a “coach”.

It makes you a f**king sales rep. That’s it. It sickens me when salespeople use terms like “coach” or “weight loss adviser” to falsely position themselves as an authority and gain a customer’s trust.

You are NOT a coach.

And if you are a coach and you choose to sell Herbalife, then I think you’re an even bigger bellend. You should know better than to push these awful, expensive products at your clients.

So all of that combined leads to Herbalife becoming the latest member of my illustrious zero stars club. Well f**king done.

The next time a friend tries to sell you this stuff, here’s what to do: