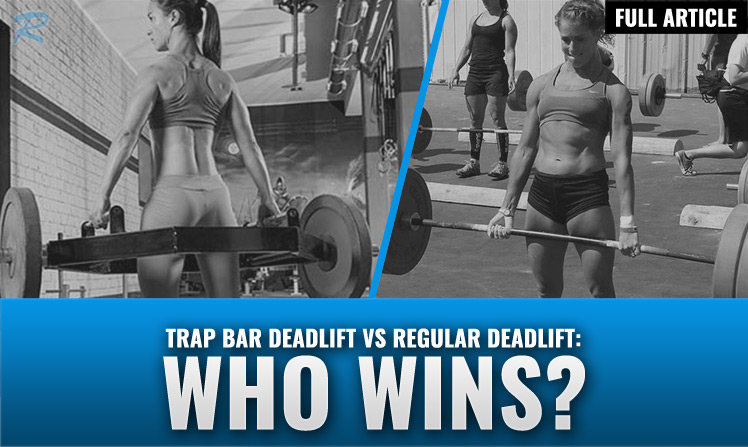 In a battle of epic proportions, the likes of which haven’t been seen since a tank fought a helicopter in Rambo III, today we’re putting two iron giants against each other to determine a true winner:

Ever since I first set foot in a gym at just 9 years old, barbell deadlifts have been hailed as “the king of exercises”.

And it’s reputation is fully deserved – that is, until now…

This article came together after the Journal of Strength and Conditioning Research published an interesting study hinting that conventional deadlifts may not be the true king of exercises. (1)

Instead, look for the trap bar.

I know… in most gyms this bar is collecting dust in the corner, but if you’re dead set on increasing your strength over the coming weeks and months, I encourage you to dig this hexagonal-shaped monster out of the cupboard and work it into your program.

The Key Differences Between A Trap Bar Deadlift Vs Regular Deadlift

Let’s take a quick look at the two movements.

Do you notice the subtle differences?

Also known as a hex bar, due to its shape, the trap bar is a great piece of kit which allows you to place your hands in a neutral position. This keeps the force of the weight centered across your full body, as opposed to pulling from in front of you with a regular barbell.

In doing so, you can handle significantly more load.

It also places much less stress on the lower back, making the trap bar a great alternative exercise for anyone who struggles with the conventional deadlift.

Here’s a more in-depth breakdown on the hex bar deadlift by Rob King.

Trap Bar Deadlift Vs Regular Deadlift: The Study In Question…

In 2011, researchers from the UK compared the effects of barbell deadlifts and trap bar deadlifts using trainees’ submaximal loads.

The group of trainees were made up of 19 male powerlifters.

Interestingly, subjects recorded an average 10% increase when they performed the test with the trap bar.

A 10% boost is impressive, I’m sure you’ll agree the hex bar as no business gathering dust in the gym cupboards when it hold these kind of gains for users!

As mentioned above, the researchers believed this increase was created by the hex bar’s ability to place less stress on the lower back and more emphasis on the quadriceps. By playing slightly more to your “power muscles”, you can pack more resistance on the bar.

These findings were re-confirmed in a 2016 study published in the Journal of Strength and Conditioning Research, where a team of researchers measured muscle activation in the quadriceps (specifically, the biceps femoris and vastus lateralis) and back (erector spinae). (2)

Alongside the expected shifts in muscle activation, they found that performing a trap bar deadlift also led to greater force, peak power, and velocity. This makes the trap bar a great asset for athletes looking to build explosive power.

Time To Ditch Regular Deadlifts, Then?

Ditching regular deadlifts would be a big mistake.

Because despite the fact research suggests a trap bar variation will lead to heavier weights being used, the good old regular deadlift should still be your first choice.

You see, this is like comparing a box squat versus a regular barbell squat. Sure, the box version will lead to a greater weight being used, but that’s because it reduces the workload placed on a lot of the important stabilizer muscles required in full squats.

If we want to be strong AF, we need to train these muscles.

So, instead of replacing deadlifts with this version, use the trap bar as part of your routine to increase your regular deadlift max.

Next up, you might enjoy this comparison of trap bar deadlifts versus barbell squats by my pals over at Dark Iron Fitness. I’ll see you next time.