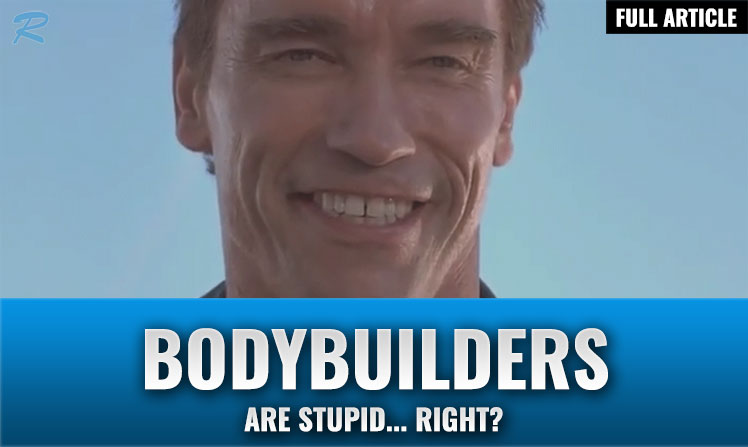 A young website reader told me he’s scared to start at the gym because he’s heard that lifting weights makes you dumb.

Today I’ll be looking deeper into this, because sadly he’s not alone here. In the last 20 years working in the fitness industry, I’ve noticed countless people believing the bulls**t myth that bodybuilders are stupid.

Heck, the first time I told one of my uncles I wanted to go to the gym, he said:

“Urgh! Why?! Bodybuilders are stupid!!!

Surely you don’t want to be like Sylvester Stallone, do you? He can barely even talk! Or what about Arnold Schwarzenegger… that meathead sounds about as intelligent as a rock!”

This was the same uncle who’d spent his entire life working a job he hated and just generally being a d**k.

WHAT DOES SCIENCE SAY?

First, the very notion that lifting iron can somehow blunt your intelligence is silly. But let’s look at the science.

A 2001 study published in the Journal of Strength and Conditioning Research discovered that students who took part in intense weight training sessions at the University of Texas achieved a significantly higher GPA (grade point average) than those who didn’t. (1)

This has since been followed up with very interesting research published in the Journal of the American Geriatrics Society. With over 135 million people expected to be suffering with dementia by 2050, this particular study set out to test the cognitive improvements associated with resistance training in people over the age of 55.

The head researcher had this to say:

“What we found in this study is that the improvements in cognitive function were related to the gains in muscle strength.

The stronger people became, the greater the benefit for their brain.”

You see, not only is it a bulls**t myth that all bodybuilders are dumb, but in fact the opposite has been shown.

However, this stereotype is deacdes old, and will probably exist forever. Take a quick look around the entertainment industry and you’ll find several examples of famous physiques mislabeled as ‘meatheads’…

A dumb robot who built the greatest bodybuilding physique of all time, and became a self-made millionaire in real estate before he was 30. He has since gone on to establish worldwide fame via his action movies.

Arnold has also done a lot more for charity than he’s given credit for.

“The Rock is just a pretty meathead who was in the right place at the right time!”

He may be the world’s most famous celebrity right now, but right place right time?

Do you know how his brand 7 Bucks Productions got its name? The Rock moved back home to his parents house aged 23, a failed attempt at an NFL career behind him, with only $7 in his pocket and no idea where to go from there.

The rest is history.

He joined the family business (wrestling) and was immediately rejected by the WWE fanbase after debuting with an awful gimmick, before going on to become one of the best to ever do it. When he transitioned to acting, he spent over a decade forcing his way up the Hollywood ladder by being, as he puts it, “the hardest worker in the room.”

It’s easy for someone to say, “Oh, he probably has people do everything for him!”. However, it’s a well known fact that he actually runs his social media himself, and it’s such a marketing powerhouse he is able to charge $1 million for advertising posts.

In 2016, The Rock signed a long-term partnership with Under Armour, a brand he’s promoted since his early WWE days, and released a clothing range which has become the company’s best-selling line in their 23 year history.

At some point we need to start ruling out luck and respecting hard-a** work.

“The only thing worse than that jerk’s acting is his lack of intelligence!”

The frightening thing about Dolph is that he could kick your a** and then explain how and why.

You see, Dolph Lundgren speaks 7 languages fluently, and holds a 3rd Dan black belt in Kyokushin karate, winning the European championship at 23. He holds masters degrees in chemistry and chemical engineering, earned at the Royal Institute of Technology (Stockholm) and the University of Sydney. He was even awarded a Fulbright scholarship to MIT in 1984, but his acting career kicked off at the same time with a role in Rocky IV.

“Yo, Adrian! That dumb meathead can’t even speak properly!”

Because of all the ‘dumb meatheads’ I’ve listed, Sylvester Stallone cops it the most. His slurred speech is often the reason for this, but it was actually caused by an accident which occurred during his birth, and has nothing to do with intelligence.

Let that sink in. Rocky has the same IQ as Albert Einstein. Holy f**k.

However, the REAL success story of Stallone comes from his journey…

He’s basically the real life version of the character he plays in many of his movies (a down-on-his-luck normal guy, up against all odds). If you haven’t heard the crazy story of how the first Rocky movie was made, set aside ten minutes and watch this. You’ll have huge respect for the man.

Sly has also been incredibly smart with his training over the years, making small adjustments which have enabled him to keep pushing his body to the limit when most other people his age can’t even stand up straight!

LET’S PUT THIS MYTH TO BED

As you can see, the myth that bodybuilders are stupid is just that… a myth!

Hey, I once watched a work colleague bump into a glass window THREE TIMES because he thought it was a door. He didn’t lift weights.

If you’ve enjoyed this article on the stereotype of bodybuilders being stupid muscle heads, hop on my free email list below for ongoing tips straight outta my gym!