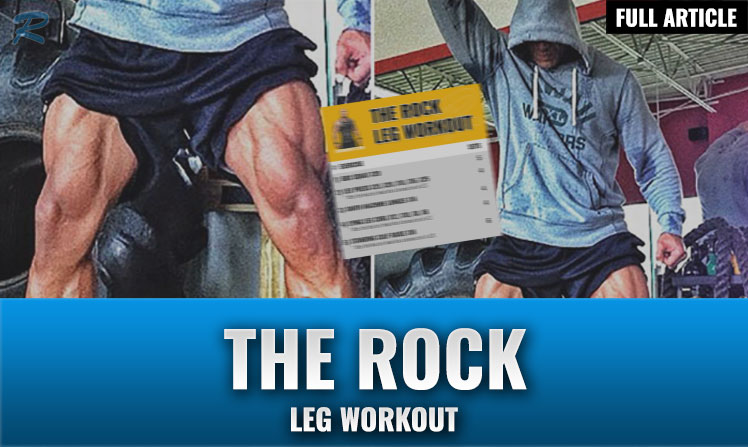 THE ROCK LEG WORKOUT: CAN YOU HANDLE IT?

Today we’re in the gym with The Rock and one thing is clear… he loves training legs.

He’s giddy with excitement as he describes the pain of the upcoming workout. Show him a new twist on an old exercise that’d make most people puke on the spot and he gets a twinkle in his eye like a kid in a toy shop.

Then again, you don’t undergo the incredible physical transformation of The Rock by taking it easy…

He’s barely recognizable from the athletic and lean WWE superstar who appeared in those first few movies. Now he carries a huge, chiseled frame that most bodybuilders would be proud of. While most guys peak in their 20’s, The Rock is in the best shape of his life at 50!

So today we are going to smash one of his favorite leg workouts; a leg workout he’s used time and time again over the years to create the huge physical transformation we’ve all seen on screen.

And as you’re about to see, those results didn’t come easy.

LEG DAY WITH THE ROCK

“I’ve always had an affinity for leg day.

I deliberately keep it back for Saturday, as a kind of sick and twisted treat for myself to look forward to all week long!”

Before you start today’s workout, there’s one issue we’ll need to address and that’s lifting technique.

The biggest mistake here is presuming he lifts super heavy. He does not. In fact, he rarely shoots for a max lift, and prefers using higher rep sets to create as much tension in the target muscle as possible. People are often floored when they try his training style because they were expecting an entirely different session.

So why does he do this?

Well, high rep work is able to create as much muscle growth as heavier work without placing as much stress on the central nervous system. That’s a huge plus point when you work 16 hour days. It also allows him to train smarter; Dwayne picked up A LOT of injuries in his wrestling days, and by focusing on training with perfect technique and lighter weights he is able to continue training very hard without running the risk of aggravating anything.

So ditch the ego, and use whatever weights you NEED to use in order to perform each exercise PROPERLY.

In case you can’t see the image above, here’s a written version.

Pay particular attention to the first exercise on today’s card.

Rocky does box squats because his knees are battered from years in the ring, but YOU can still get the benefits of this exercise even if your knees are fine. Most gym-goers do not perform barbell squats with great technique, and this exercise is excellent for improving that, so it plays a very important role in the program. Heck, the box squat is actually a pretty great exercise in its own right, too. Because of the extra weight which can be loaded onto the bar, you’ll produce much more force (versus a regular squat) when driving out of the hole. (1)

So after the final set of the exercise, we drop some weight from the stack and immediately carry on performing reps until our legs, as the name suggests, burn out. Try to leave minimal rest between the end of the final set and the start of the burnout set. When you hit this technique correctly, you won’t want to look at another leg exercise for a few days.

And that wraps up today’s session! If you enjoyed reading about The Rock’s leg workout, consider hopping on my free email list below for more training tips straight outta my gym!