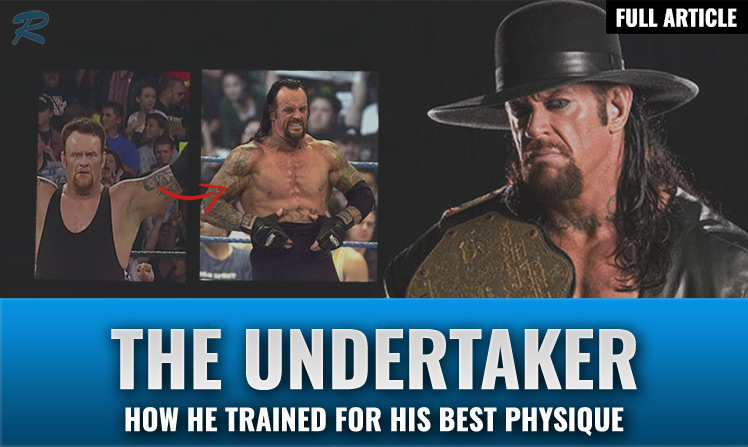 How The Undertaker Trained For His BEST Physique

In life, few things are perfect.

Maybe Jon Bon Jovi’s hair… or the cool side of the pillow… or women who know how to use power tools.

But if I were to add one more thing to the above, it’s The Undertaker in 2009.

And in today’s article I’m going to walk you through exactly how “The Deadman” got into the shape of his life when, at 42 years old, most people are starting to head in the opposite direction!

Before we look at an actual training routine, I need to tell you 3 things which are crucial to how this plays out.

First, The Undertaker was never in bad shape.

Sure, he put on a bit of weight in the early 2000’s, when he changed his wrestling gimmick (character) from the one we know and love to the biker character, which we also know and love but not quite so much.

However, he was never “out of shape”.

But what he was about to do would take his physique way beyond where it was at the time, and even eclipse his early WWE days where, as a young buck, he was consistently tasked with picking up 350lb giants because, well, he’s strong as f**k.

Second, we need to mention his ex-wife, Sara.

He’s made no secret of the fact that Sara was a crucial component in cleaning up his diet in the mid-2000’s as he transitioned out of his biker character and back to the classic Deadman.

Although the couple divorced in 2007, the foundations which allowed The Undertaker to have a “second coming” were already in place years a couple of years prior.

In fact, at a stage when most of his peers were winding down, ‘Taker still had many of his now classic Wrestlemania matches ahead of him (Edge, Shawn Michaels, Triple H, AJ Styles).

Which brings us to the next thing… Batista.

Some folks reading this may know Dave Bautista (real name) from his roles in the Marvel Cinematic Universe, but if you were a WWE fan back in 2007, you know him as the 290lbs ripped motherf**ker who sat atop the WWE mountain for a while, and gave The Undertaker a real run for his money.

From a marketing perspective, everything about Batista was perfect. He had the looks, he had the body, he had the attitude. He was essentially a bodybuilder in wrestling trunks. Alongside the always sellable John Cena, he was the WWE’s golden boy…

… and he moved to Smackdown at precisely the right time for The Undertaker.

You see, ‘Taker was at a stage in his career where many thought his prime years were gone. He wasn’t being used properly by those in control. He’d regularly be thrown into novelty matches with bigger, ‘monster’ opponents for no other reason than “Well, he’s The Undertaker.”

Quite frankly, he looked bored as s**t.

Suddenly, in Batista, he had real competition and he knew it.

The pair struck up a friendship off-screen, and Batista’s mission to carve the perfect physique in the gym appeared to add fuel to The Undertaker’s fire. Suddenly he was rocking a tan and the changes to his body were becoming increasingly noticeable.

Viewers got to witness both men appearing more muscular and chiseled each week, and the pair also achieved the remarkable feat of guiding Smackdown (the WWE’s so-called “B” show) to higher ratings than its flagship show, Monday Night Raw, thanks to their excellent on-screen rivalry which lasted the best part of a year.

The Undertaker was back to his best, and then some.

THE UNDETAKER WORKOUT ROUTINE FROM 2009

During the late 2000’s, The Undertaker followed a bodybuilding style training program.

You won’t see any resistance bands or Bosu balls here, and hey, there’s nothing wrong with that.

At this time, his goal was to look lean and ripped.

He didn’t want the size he’d displayed in the late 90s, nor the “steroid look” owned by his contemporaries. He wanted to look like a big man who could move, and he knew his diet was the key to making that happen.

So using the nutritional foundations laid in the years leading up to his feuds with Batista, he rigidly dialed in his calories and macronutrient targets and focused his training around building lean muscle.

What followed were the best physical years of his career, and now-legendary matches with Batista, Edge, Shawn Michaels, and Triple H, before those old injuries started to catch up. More on that later.

Early morning cardio was a prerequisite, with ‘Taker often finding local “spit & sawdust” gyms to train in the moment he landed in a new city so he could get his cardio in, and weights workouts used a typical “bro split” which saw him hit each muscle once per week.

Sticking mainly to mid-to-low rep ranges (8-12 reps per set), he’d rely on the classic bodybuilding principles of progressive overload (heavy weight = build muscle) and metabolic stress via dropsets (fight through the burn = build even more muscle) to carve the physique we saw on screen.

PUSH UPS x100
(Warm-up using as many sets as needed)

CRUNCHES x200
(As many sets as needed)

LYING LEG RAISES x100
(As many sets as needed)

CRUNCHES x200
(As many sets as needed)

BODYWEIGHT SQUAT x100
(Warm-up using as many sets as needed)

LYING LEG RAISES x100
(As many sets as needed)

HOW DOES THE UNDERTAKER TRAIN NOWADAYS?

If I could make one argument about the routine you see above, it’s that The Undetaker could’ve trained smarter from an earlier stage in his career.

Then again, I don’t wanna pick faults. After all, he’s the f**king Undertaker.

So, in his own words:

In theory, with the knocks he’s taken in the ring and the injuries he’s sustained over the years, he should have retired a long time ago. His change in training style in 2013 played a large part in him being able to continue doing what he does best until 2020, when he decided to officially retire from WWE.

The main switch was that he no longer trained with a primary focus on looks.

Sure, wrestlers have to look good. But the older you get, the harder it is to move, particularly in a WWE ring, so this became the priority. At nearly 60 years old he was simply trying to put on great matches whenever he could. He’d be in the ring with guys much younger than him, and wouldn’t be content to be carried through matches. This required him to train smarter, not harder. It’s safe to say the approach paid off, with his final match against AJ Styles stealing the show at WrestleMania 36.

So how did he go about restructuring his training, and how does The Undertaker’s workout routine in 2020 compare to that of 2009?

When your job is literally picking up massive people and throwing them, you cannot escape the need to pick up big weights in the gym. I mentioned earlier that The Undertaker is a strong guy, and I meant it. Here he’s performing a below-the-knee Rack Pull (let’s not forget he’s 6’8″!) of 500lbs earlier THIS YEAR.

Alongside this abbreviated form of deadlifts, he still performs heavy pressing movements and he still squats fairly heavy (albeit the Box Squat, which is easier on those war-torn knees).

But the key changes to his routine occur in what surrounds those heavy compound lifts. The bro split is gone. The isolation work is minimal.

Instead, The Undertaker now performs movements which are a hell of a lot more specific to his job as a wrestler (not a bodybuilder). Alongside the basic strength work mentioned above, he does a F**K-TONNE of conditioning. You can often find him blasting through intervals on the rowing machine, and in the video below you’ll see him nail an impressive 40″ box jump.

If these changes were made a few years earlier, it may have yielded another 5 years of “prime” Undertaker.

But it was a smart move nonetheless, and I’ll take it.

Hell, this is a guy who’s had so many wrestling-related injuries, people were talking about him possibly needing to retire way back in 1999! He shouldn’t be able to do any of this s*t at the level he does it.

Well played, Undertaker. You genuinely are a Phenom.

If you’ve enjoyed reading my breakdown of The Undertaker’s workout routine, you’ll probably also enjoy my look at how Sylvester Stallone has adapted his training throughout the years or how John Cena built his WWE body. Go read those next by clicking on it, and jump on my email list below by entering your email (duh!).