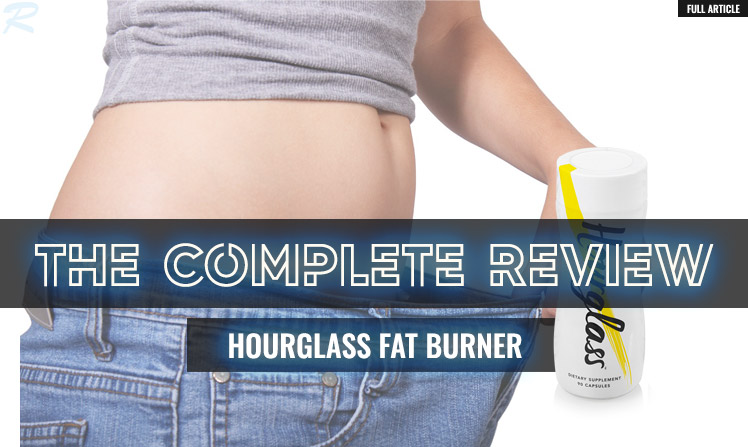 What would you say if I offered you a miracle weight loss pill which could erase blubber from your midsection with no effort…?

Oh, and it’s GUARANTEED TO WORK.

You’d say I’d finally snapped, and likely spent the morning stapling my tongue to my own forehead.

But wait up! Because it’s time to put Roar Ambition’s Hourglass Fat Burner under the microscope, and that’s precisely what they’re claiming their latest product can do.

Will it be the first supplement ever to land a 5 star review from me? Or is it about to be torn a new a**hole?

(I THINK YOU KNOW WHICH!)

Roar Ambition are making a name for themselves as a brand who like to make outlandish claims about their own products, in the hope that enough people will take a shot on it.

Take a look at my earlier reviews of 4-Gauge and Instant Knock Out and you’ll see.

And hey, it works.

With year-on-year growth of 38%, they are clearly onto a winner.

But we’re not here to determine whether their marketing approach is effective, we’re here to see if the product is any good… and it’s BAD NEWS.

Despite all the hype surrounding the product (and we’ll ge to that later), Hourglass Fat Burner is a simple, cheap to make supplement which claims to speed up the metabolism and create fat loss via a combination of glucomannan and green tea extract. As you’ll see when we break down the science in a moment, those claims are absolute bulls**t.

But where they REALLY shoot themselves in the foot, as usual, is when they make crazy claims about what each of these ingredients can do to “enhance” fat loss, when research shows us they are pretty much useless.

In fact, we can use Roar Ambition’s OWN SALES PAGE to debunk the bad science!

Glucomannan is the star of the show.

This is a soluble fiber and I think it’s a great inclusion because most people don’t eat enough fiber, but Hourglass bizarrely claim that it is “proven to lead to weight loss”, which it certainly isn’t!

This was proven in a 2014 meta-analysis published in the Journal of the American College of Nutrition. A meta-analysis is where researchers look at every available study ever published on a certain topic or ingredient, and in the case of glucomannan they noted that glucomannan had such a tiny impact on weight loss it was deemed statistically insignificant. (1)

And then there’s the old “speed up your metabolism” claim…

Most fat burners use this line to convince potential customers they can burn more calories while doing nothing at all, because it sounds great, and Roar Ambition use it a staggeting NINE TIMES on one page (!!).

They never delve into any of the science behind these claims, and that’s because none exists. They’ll link it to the inclusion of green tea extract, but despite the fact that this ingredient is often thrown into weight loss supplements, research does not support its reputation as a so-called “fat burner”. (2, 3, 4)

And it DEFINITELY has no effect on resting metabolic rate – as demonstrated in a 2009 study published in the European Journal of Clinical Nutrition. (5)

So let’s put this myth to bed: green tea doesn’t speed up your metabolism!

Spot reduction is not a thing.

We all love the idea of being able to target fat from a specific area of our body (lower abs, hips, etc), but the fact is we can’t.

Spot reduction claims are normally associated with exercise (i.e. people being told to do crunches to lose fat from their midsection), so it’s even more strange that Hourglass Fat Burner claim that A PILL can do it.

Studies show that fat loss isn’t a multiple choice question. We cannot tell it to “lift our jawline”, or “tighten our glutes”. Your body will simply burn fat from wherever it wants to, and anyone saying otherwise is lying. (6)

There is no such thing as a miracle fat loss pill.

It’s important to remember that fact as we delve deeper into the sales page for Hourglass Fit, because Roar Ambition will do their utmost to try to convince you to they’ve discovered a silver bullet.

“It’s simple biology. The body and metabolism of an athlete responds entirely differently to the rest of the population. So an athlete’s choice of fat burner almost certainly won’t be the most effective for your body shape and metabolism, which is where Hourglass Fit comes in!”

That’s not biology at all!

This is audience manipulation, which sees Roar Ambition try to win back women who have previously tried fat burners and got no results by hinting that it’s because those other fat burners weren’t fomulated properly.

Allow me to re-phrase it:

“By saying NO to harsh caffeine and other stimulants, we take your mood and well-being into account.”

It’s interesting how much talk there is of caffeine being bad for you, because their other fat burner relies heavily on it. Also, they’ve failed to realize that two of the ingredients in Hourglass are packed with caffeine (green tea extract and guarana)!

“We give you a powerful combinaton of mother nature’s finest fat burners. The most optimized female fat burner available without prescription!”

That’s a massive claim to make, and it’s full of holes.

First, women don’t need different fat burning ingredients to men. Male and female bodies will respond exactly same way to everything in Hourglass. Second, even though the company offer very little research to support claims that this is “the strongest fat burner available without prescription”, each ingredient in the formula has decades of clinical trials which are easy enough to find.

The problem is the research doesn’t support what they’re saying at all (!!).

For instance, guarana is only effective for weight loss purposes when combined with the illegal fat burner ephedra, and in order for chromium to help curb cravings you’d need a dose 10x the size found in Hourglass – and even then it would only work if you had a legitimate chromium deficiency. (7, 8, 9, 10)

And just when you thought it couldn’t get any worse, it does…

That’s right, they’re claiming you can eat whatever you want and STILL LOSE WEIGHT.

“Because Hourglass Fit simultaneously burns fat while boosting your metabolism, no food is off limits!”

There is not a pill in the world which can override the law of thermodynamics (i.e. you must eat fewer calories than you burn in order to lose weight). Telling somebody who wants to lose weight that they can eat whatever they want with no repercussions makes zero sense. It’s like telling someone who wants to save money that they can go wild on their credit card without consequences. (11)

And with this claim, they’ve really gone and p**sed me off.

And this is where things get weird.

“How did those silk-clad courtesans of the Chinese Empire Dynasty maintain their tell-tale curves? In the history of classical beauty, it’s a question that puzzled Western science for decades. But now, the answer has been revealed. And the biochemistry behind it is at the core of Hourglass Fit!”

Are they implying that old-school Chinese prositutes were slim because they drank green tea?! Maybe it’s because they didn’t have a f**king McDonald’s on every corner.

“It has long been established that certain people in the world manage to maintain their shapely figure even when consuming the same amount of calories as people in the West. Their secret baffled observers for centuries, but did you know the answer could lie with ONE key ingredient?”

They go on to tell us that it’s all down to cayenne pepper (seriously).

While it’s TRUE that spicy ingredients can increase the thermic effect of food (you burn more calories digesting it), we’d need an absolute f**k-tonne to produce even a small improvement.

But it’s like they’ve realized that if someone’s read this far down the sales page, they can pretty much get away with saying anything, so they keep going…

“Indigenous tribes have valued the guarana bush since time began. Its jewel-like fruit forming a key component to their diets and natural medicine cabinet, and now modern studies have unveiled the fat burning benefits it delivers!”

You may remember guarana from the time if featured on Dr. Oz as the next big fat loss supplement of 2002. Modern studies have NOT shown any fat burning benefits. Instead, they’ve shown us that it’s absolutely useless except when taken alongside the illegal fat burner ephedra. (12)

See, I’ve got your back. At the top of this article, Uncle Russ predicted they’d do this…

“Perhaps you’ve had previous experience with other fat burners, only to be left disappointed? But, almost certainly, this was based on green coffee bean or caffeine based fat burners, which produce negligible short-term effects, and no long-term difference. You soon become tolerant to caffeine’s effects and the positive impact is curbed. Because Hourglass Fit says ‘NO!’ to caffeine (a cheap ingredient used to bulk out inferior products) you’ll experience none of the upset stomach, bloated tummy or energy slumps associated with so many other fat burners! Instead, you’ll be able to get on with your day – with your sugary cravings curbed – silently and safely fighting fat. We’re so sure of it, we guarantee it!”

I’d like Roar Ambition to explain something to me. If fat burners containing green coffee bean and caffeine are so bad, why is their other fat burner based solely on those two ingredients?

And if you’re reading my review having been disappointed with Hourglass Fat Burner, might I suggest you take them up on that “guarantee”? After all, they haven’t been thorough enough to include any stipulations (i.e. must be combined with a calorie deficit and exercise), so you might make some money there.

This corker was the last piece of sales blurb I could take:

“Hourglass costs significantly less than the alternative – personal trainers, meal plans, or wasting your money on ineffective formulations from other brands!”

Man, that’s the final straw. A fat burner capsule should never be considered an ‘alternative’ to training and diet.

As you can probably tell, I wasn’t a fan!

If Hourglass was truly capable of burning fat without the need for exercise or even the need to watch your diet, Roar Ambition would be awarded a Nobel Prize for ending the worldwide obesity crisis.

Instead what we’ve got is a direct follow-on from the company’s previous releases: a bunch of cheap ingredients and very little supporting data which have been packed into a pretty tub and slapped with a hefty £35 price tag.

The formula of Hourglass isn’t a million miles away from the vast majority of other so-called “fat burners” on the market, and I do like the inclusion of glucomannan, but they dig themselves such a big hole with their crazy claims that I docked an additional half a star for them being such atomic t**ts.

Of course, this is just my opinion. You don’t need to listen to me, or the science. You can check it out for yourself here. It gets one star.