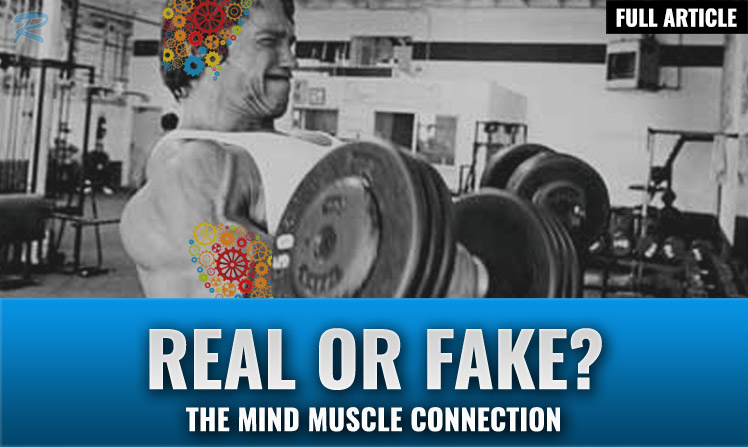 IS THE MIND MUSCLE CONNECTION REAL?

Is the mind muscle connection real, or is it just an old, outdated bodybuilding myth that needs to be put to rest?

Today we will use science to get to the bottom of this topic once and for all.

For those of you who are unfamiliar with the mind muscle connection, Arnold Schwarzenegger once described it as:

“The ability to zone in on the muscle you are targeting, while you work it, causing greater results!”

Some readers will rightfully think this sounds like crazy nonsense. After all, how can simply thinking about a muscle spike the anabolic response it has to training?

But crazy as it may be, it’s a VERY popular belief in the bodybuilding world. Celebrity trainer Zach Evan-Esh credits mastering the mind muscle connection with his early results in the gym, and I know many of you have heard CT Fletcher talking to his biceps…

IS THE MIND MUSCLE CONNECTION REAL?

These findings confirmed what every bodybuilder has been saying for years – the mind muscle connection is REAL.

More reserch then began appearing in subsequent years, first via a 2014 trial published in the Journal of Neurophysiology. This time participants had their wrists wrapped in surgical casts for 4 weeks, and half of them were instructed to sit quietly and visualize flexing their immobile wrists for 11 minutes per day, five days per week. The other group did nothing. At the end of the trial, the wrist muscles of the visualization group were TWICE AS STRONG! (2)

Then in 2016 researchers from Denmark returned to the gym to discover more on how we can maximize the results of the mind muscle connection with a weight training program. They had trainees performing reps with 20%, 40%, 60% and 80% of their max and found that the only time participants COULDN’T increase muscle activity was when they lifted 80% of their max (this matches the findings of the 2012 study). (3)

So what does this tell us?

Well, it confirms that the mind muscle connection is REAL, but also shows us that we lose the ability to channel it when we approach the top end of our strength range. Once we cross the tipping point it appears we are unable to focus, and it becomes a case of just trying to move the weight.

So try to maximize the mind muscle connection when you’re performing higher rep work with lighter weights… and in the immortal words of The Rock: “FOCUS!”