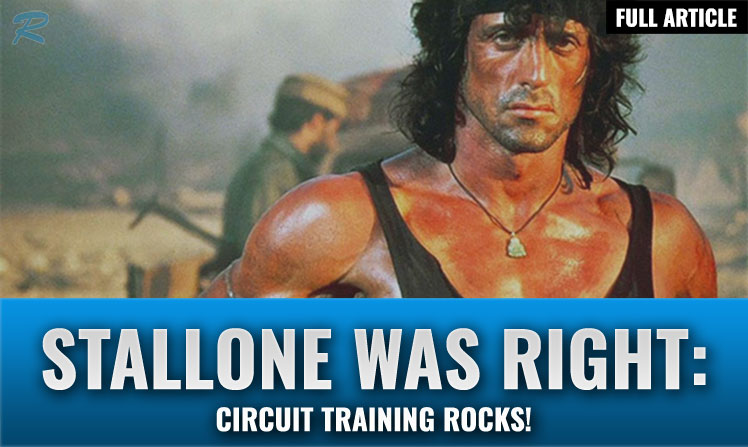 Sylvester Stallone is one of the pioneers of HIIT.

Back in the mid-1980’s, Sly was training with methods that didn’t become overly popular until almost twenty years later, and one of those methods was circuit training.

Although hugely prominent now, it certainly wasn’t the done thing back in 1985… and DEFINITELY not the way Sly was doing it.

On one side of the fitness space, we had Arnold Schwarzenegger dominating the silver screen with his sheer mass, and guys around the globe were following the latest bodybuilding training plans in a bid to emulate the Austrian Oak. On the other side we had Jane Fonda pushing out home workout videos which promised to “tone, not bulk.”

Stallone headed in a different direction with his own training, and in doing so he sculpted one of the best physiques the movie world has seen to date.

Most people thought he was crazy, but there was a method to the madness.

Instead of the typical “three sets of ten reps”, Sly’s workouts bore an uncanny resemblance to Rocky training montages. If you watched me take on the Rocky IV arm workout on my YouTube channel, that’s a pretty good example of how he trained every single session.

He’d stick exercises together in small groups (supersets, trisets, and giant sets), then whizz around the gym without rest to annihilate his target muscle groups of that day.

What made Sly’s circuit training even more unique is that he wouldn’t skimp on the amount of weight he used, either. He was searching for muscle failure and progressive overload, in order to ensure maximum muscle was being built alongside the fat loss benefits he was experiencing. In order to achieve this he deliberately used weights which were going to challenge him for the number of reps he had to perform.

So no pink, fluffy dumbbells here then!

This is now commonly known as circuit training. It’s a well-rounded training protocol which covers all the bases, and that’s precisely what Stallone was attempting to do in the mid-80’s.

He wasn’t trying to be the biggest. Ah-nuld had that title nailed down. Instead, he wanted to be the leanest. He strived for the most athletic, explosive physique on the big screen.

So why is this type of training so effective?

Circuit training will help you to build muscle and improve your fitness levels, but the main benefit it offers is FAT LOSS, ao that’s what I’ll focus on in this section.

The first proper study on it dates all the way back to 1992.

Published in the Journal of Strength and Conditioning Research, researchers were trying to compare the possible fat loss effects of circuit training versus standard weight training. (1)

Specifically, they were interested to see the differences in EPOC (excess post-exercise oxygen consumption), to gauge whether circuit training would cause a larger calorie burn.

The results were beyond expectations – circuit training almost DOUBLED the magnitude of EPOC, and it lasted 25% longer!

Needless to say, this really turned heads in the fitness industry at the time and got the ball rolling in terms of scientific research.

The next big study focused more on the rest periods.

If the original trial showed that lowering rest between sets from 2 minutes down to 30 seconds yielded much better results, how low could we go for optimal results? The questions were answered in 1999 by researchers from Southeastern Louisiana University. (2)

This time all participants performed circuit training, but some groups took 20 seond rest breaks and others took 60 seconds. Could going even lower in rest lead to a greater metabolic effect?

The 20 second group did notice a higher rate of EPOC, but the much shorter rest periods left them feeling tired before the workout was over. Meanwhile, the group with 60 second rest periods benefited from being able to train harder, and therefore the overall calorie burn was offset.

This seems to suggest that unless you have elite fitness, your rest periods should be somewhere around the 1 minute mark for optimal results.

As you can see, the research was beginning to fall into place.

In 2008, the International Journal of Obesity published the results of a trial which showed that a group of women lost significantly more fat and saw improvements in insulin resistance after performing 15 weeks of circuit training versus performing steady state cardio. (3)

Similar findings were reported in 2014 when researchers put a group of obese men through a 4 week circuit training program.

They primarily dropped body fat and improved insulin resistance, alongside secondary benefits of a smaller increase in lean muscle tissue and a decrease in resting heart rate. (4)

The American Council on Exercise offers a unique insight into why circuit training outperforms cardio for fat loss.

They state that most of the cardio equipment in public gyms is lower body dominant, whereas properly structured circuit training will work the full body.

We can even incorporate resistance-based exercises into the mix, firing up more type 2 muscle fibers and building explosive strength, which adds another dimension to the possible results.

Perhaps now you can see why I called Stallone a pioneer of this training style. Take a look at the dates of the studies I’ve shown you. 1992, 1999, 2014, even the earliest research was YEARS after Sly had incorporated circuit training ito his program.

So how do you create a circuit that’ll have you training the same way Sylvester Stallone did in the 1980’s?

Well, there are a few rules.

As seen in the workout below, from his intense training for Rocky IV, Sylvester Stallone liked to perform a circuit for each individual muscle group he wanted to train on that day. This one shows a circuit for biceps, triceps, and even forearms. His goal was to annihilate the target muscle and cause as much muscle growth as possible, while still focusing on fat loss by keeping rest periods down to 1 minute.

Most people are not going to need this much detail or volume, so if your primary focus is fat loss we can change a few things and still see great results.

Your total calorie burn will be increased and your results will be amplified.

We should also keep an eye on total workout time (“you can train long, or you can train hard!”). Your rest between sets should be somewhere between 20-60 seconds depending upon your fitness, and you should be finished in less than an hour (max).

CREATE A CIRCUIT USING THIS TEMPLATE:

DO YOU HAVE ANY ONLINE TRAINING PROGRAMS WHICH USE THIS TYPE OF TRAINING?

After reading an article like this, this is the obvious quesion on most people’s lips.

Of course the answer is yes.

Take a look in your Members Area and you’ll see two programs which utilize circuit training for maximum results; The Rip Down & Home Workout Hero.

The Rip Down is a weight-based circuit training program which combines all of the research in today’s article into a devastating 40 day fat loss plan. As the name suggests, Home Workout Hero is a home-based training program.

If you’ve enjoyed reading this comprehensive breakdown on why Sylvester Stallone used circuit training to prepare for his leanest movie roles, be sure to hop on my email list for more training tips.