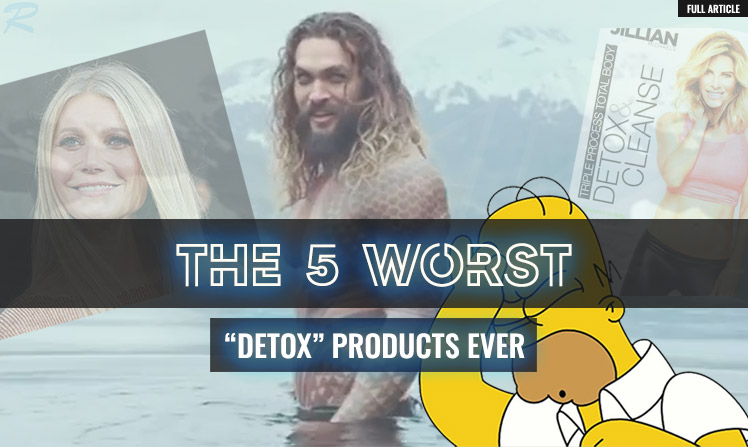 THE 5 WORST “DETOX” PRODUCTS IN THE HISTORY OF EVER

The detox industry is a scam.

It seems whatever your illness or ailment may be, there’s always a snakeoil salesman who can trace it back to “evil toxins”.

Heck, I recently had someone at the gym try to sell me some rather expensive capsules they claimed could “combat the dangerous mercury levels in tuna”…

To reach dangerous levels of mercury via tuna I’d quite literally have to get bummed by Aquaman.

(And there’s my thumbnail!)

So I’m just gonna have fun with it. In this post I’ll show you some examples of what I consider to be the worst of the worst, in an industry that’s full of s**t.

Before reading further, just bear in mind that things are gonna get crazy.

YOU HAVE BEEN WARNED…

Let’s start with the lighter side of things.

Everyone knows about detox juice drinks, because EVERYONE has a pushy friend who sells them.

She stalks the school playground at hometime looking for people who are too polite to say no, and you LAUGH TO YOURSELF as she latches on to another poor soul because it means you’ve escaped for another day. Until one day, you get got… rolling up to school after a crazy morning with a 5 year old tucked under your arm wearing underpants on their head and a Nutella smile reminiscent of Heath Ledger’s Joker, you realize she’s got you flustered and cornered.

What do you do?

Well, if you’re like most people, you take her “sample pack” and sign up for a monthly subscription you don’t want, then kick yourself all the way home for being such a dumb motherf**ker. Well done.

But what even ARE these things? Can they geuinely help you to lose weight and/or remove dangerous chemicals from your body?

Detox juice drinks are merely overpriced fruit shoots that will do none of the above.

Let’s use the popular Green Supreme by Suja Juice as an example. They claim you’ll feel rejuvinated by their blend of vitamins (and they can’t tell you what they are, because they “only test for potassium and calcium”) but fail to highlight that it contains 36 grams of SUGAR. And at a cost of $8 for a tiny bottole containing just 2 SERVINGS, the only thing getting lighter here is your f**king wallet.

At a fraction of the cost – and the sugar – you could just eat some vegetables.

No I’m not talking about what’s inside a wrestler’s rucksack, I’m talking about a BILLION DOLLAR INDUSTRY where people stick things to their body and it rids them of evil toxins.

If you thought the lady who sells juice drinks was bad, just wait until you meet one of these motherf**kers!

Some of the most popular include clingfilm wrap by a brand called “It Works!” (ironically it doesn’t), and detox food pads which are placed on your feet at night so that when you awaken you’ll see an awful brown sludge on the pads which the manufacturers proudly state is “toxins which have been drawn out of the body”. It’s bulls**t, of course. The pads contain wood vinegar, which goes brown when mixed with human sweat.

There are also colon cleansing capsules (seriously), which turn your poop into something resembling a long, black snake, and you get to yell “Bye, toxins!” as it slithers down the u-bend – but what’s REALLY happening is the pills contain a polymersing agent which simply puts a plastic overcoat on your s**t.

Okay, it’s time to turn the crazy up even higher.

If you’ve never heard of The Master Cleanse before, then I’m absolultely DELIGHTED to be the person who introduced you to it because we are dealing with NEXT LEVEL dumbf**kery here!

The Master Cleanse entices customers in by promising it can cure every disease. You read that correctly. EVERY DISEASE.

By making such a bulls**t claim, the creators openly display their lack of conscience, deliberately targeting people who are willing to throw the dice and gamble when all else has failed.

F**k these guys. I hope their next poo is a hedgehog.

It caught on trend back in 2006 when Beyonce used it, and it has remained in the limelight ever since by taking advantage of gullible celebrities who have large audience for them to cash in on. It’s like Scientology, but with diets.

Researchers from Harvard absolutely nailed The Master Cleanse to the wall in a 2008 report titled “The dubious practice of detox”:

“The Master Cleanse remains a popular Hollywood diet despite having no data to show its effectiveness. The dieter is following a very low (600) calorie diet which is lacking in protein, fatty acids and other essential nutrients. Also, the daily laxative regimen can cause severe dehydration.

Once the dieter resumes normal eating, rapid weight gain follows and much of the weight lost comes through fluid lost due to the nature of a very low carbohydrate diet.”

If you are strugling with your weight, go to a professional.

DO NOT buy tablets from some orange motherf**ker on social media just because they have a blue tick.

The world of fat burners and detox pills hinges on celebrity endorsement, and it’s a very dangerous place to be because some of them are happy to throw in awful dieting advice that they’re not qualified to dish out.

But while I can forgive celebrities for being somewhat naive, I cannot forgive fitness professionals for venturing into this dark part of the fitness world. They should know better… Step forward Jillian Michaels, of The Biggest Loser fame.

Ms. Michaels claims that her detox supplement can “clear away harmful toxins” and “support the colon and digestive system”. Does she provide any proof?

Claims like this have caused her to be sued THREE TIMES (SO FAR) regarding false advertising for fat loss pills. Ironically, she recently wrote a Women’s Health article claiming she wanted to put an end to “fitness BS” – and subsequently failed to mention that her entire supplement line is part of it.

But before we really get into it, I must say I think she’s a GENIUS – because despite having no background or qualifications in health and fitness, this actress-turned-liar has made an absolute f**k-tonne of money by selling supplements to people looking for a magic bullet.

My favorites include a $66 egg which is quite literally placed where goes up your hoo-haa (please don’t do it, it’s totally useless) and her diet recommendation that “busy parents who are struggling to lose weight should go on a two week raw goat milk cleanse“.

Her brand Goop even recommended that breastfeeding parents ween their kids with raw goat milk, too, because THAT doesn’t sound dangerous!

But at some point the public has to take responsibility for the utter bulls**t she gets away with. I mean, Goop’s profits didn’t even drop despite her admitting the products were s**t on live TV,so like I said: