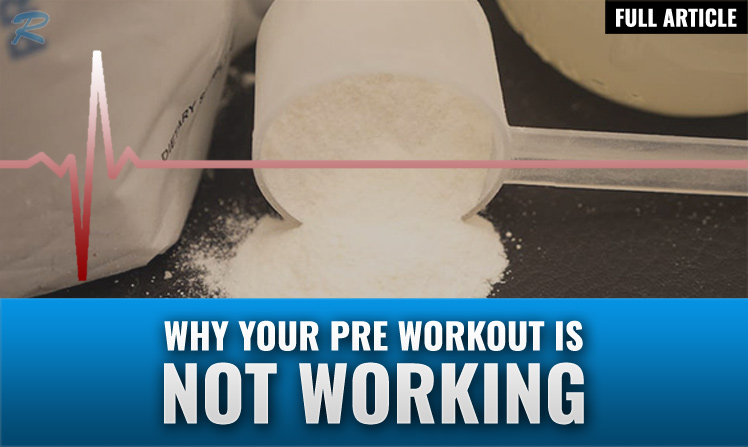 Why Your Pre Workout Is NOT Working Anymore

Let’s get to the bottom of this right away, so you can start kicking a** in the gym ASAP.

There are only two reasons most pre workout supplements FAIL to deliver results.

YOU HAVE ADAPTED TO YOUR PRE WORKOUT.

One scoop used to do the job, but now it’s two scoops… three scoops… four scoops… just to feel anything!

Okay, this depends what you mean when you say you can’t “feel” it anymore…

If you’re speaking about the skin crawling effects of beta-alanine, it’s perfectly normal for this to wear off after about a month of continued supplementation. However, that’s actually a side effect, and not the main reason you’re using beta-alanine, so don’t worry about it.

I’ve known guys munch down 3, 4, even 5 grams of beta-alanine just to re-experience that sensation and it’s utterly pointless, because the training benefits max out at 3.2 grams!

If you’re talking about ENERGY LEVELS, however, it’s another ball game entirely…

The only ingredient in your PRE that you’ll become somewhat “immune” to is caffeine, because your body adapts to stimulants much like it adapts to weight training (15kg used to be heavy, now you use 20kg; 100mg caffeine used to blow your head off, now it does nothing).

So, if your pre workout doesn’t contain enough caffeine to give you a kick, take a look how much caffeine is in there and get one with more!

However, I recommend never going above 400mg caffeine. If your current pre workout provides this and you need more, take it as a sign you’ve become a full-fledged “stim junkie” and need a different approach. I recommend removing caffeine from your stack entirely for 1-2 months (try a stim-free pre workout) before re-introducing caffeine at around 200mg and increasing by 25-50mg each time adaptation occurs.

YOUR PRE WORKOUT IS UNDER-DOSED.

I like to call a spade a spade – some pre workouts just SUCK!

They under-dose key ingredients, and they get away with it because most people don’t know what to look for.

Simply including an ingredient enables a manufacturer to make the claims associated with that ingredient. So I could add 1mg caffeine to a sports drink and then proclaim it to be an ‘energy drink’, make sense?

This is a silly industry loophole which manufacturers continue to exploit as it enables them to produce dogs**t products that cost pennies to make.

Another industry loophole allows manufacturers to hide their entire formula behind a proprietary blend; meaning you know what’s in there, but now how much.

Make no mistake, a good pre workout will NEVER hide its formula.

And these shady tactics are more popular than you might think, too. Here’s a quick list of some well-known pre workouts that either hide the formula behind a proprietary blend, or are simply under-dosed:

Of course, not ALL pre workouts are s**t. There are some out there which generally get the job done, and I’ll happily recommend these to clients & website members when in search of a ‘ready made’ option: