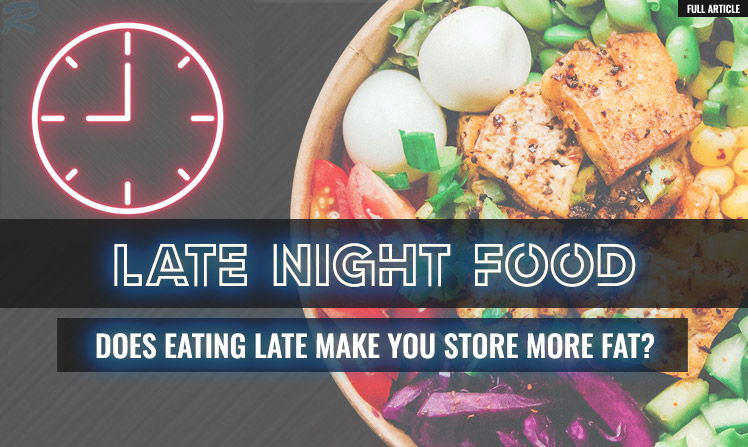 DOES EATING LATE AT NIGHT MAKE YOU STORE MORE FAT?

Today I’m going to go through the science on this topic, but before we get stuck into any of that, let me put your mind immediately at ease by revealing:

No, eating late at night will not cause weight gain!

When I was an up-and-coming personal trainer in the early 2000s, I’d regularly hear this myth on the gym floor. The theory was that if you ate a meal late at night you’d be unable to burn off those excess calories, and the body would have no choice but to store them as fat.

Thankfully, it doesn’t work that way!

Think about this; should a nurse or a firefighter working busy 12 hour shifts be expected to avoid eating when they arrive home just so they don’t gain weight? Of course not.

So where does it come from?

Well, the belief that eating late at night causes weight gain stems from the theory that our metabolism grinds to a halt while we sleep, which makes fat loss much harder. However, research show this isn’t the case. A 1999 study published in the European Journal or Clinical Nutrition discovered that our basal metabolic rate (BMR = the rate at which our body burns calories) isn’t significantly different during the morning, afternoon, evening, and even while you sleep! (1)

Since then we’ve seen more studies which double-down on these findings, with one from researchers in New York finding that in healthy individuals BMR actually rises slightly during sleep. (2, 3)

THE STUDY THAT ENDS THE MYTH

One of the reasons I’m writing about this today is because this myth pops back into the news every few years and it only serves to confuse people.

Just last year we saw news headlines claiming that eating food at night causes weight gain but, as always, they weren’t giving you the full picture.

In this case, what they didn’t mention is that they grossly misrepresented what the researchers actually found…

The study was also nowhere near long enough to draw any conclusive findings (just one week). In all honesty, you could distort those results with one big poo. (4)

So in order to get to the bottom of this once and for all, we need something a lot more thorough…

Luckily, a comprehensive 2011 study published in Obesity gives us this and more!

This monstrous six month trial from researchers in Israel had two groups of police officers following a strict calorie and macronutrient controlled diet. The key difference is that one group were instructed to eat their calories at regular intervals throughout the day and the other group ate most of their calories at night.

The researchers discovered that eating late at night had ZERO links to weight gain.

In fact, in a bizarre twist of events the group who ate late at night actually lost more weight, as well as experiencing reduced feelings of hunger. (5)

Does this mean that eating late at night is actually BETTER?!

Not really. The average weight loss results of both goups of participants were pretty great and the numbers were similar (21lbs lost & 25lbs lost). It just shows that your body will process the calories it receives in the same way no matter what time of day it is. This means you don’t need to avoid a meal just because it’s past a certain hour.

Therefore, I recommend simply eating at the times of day which best suit you. The golden rule of a successful diet is that we must control total calories to lose weight, so “the best diet” is the one you can stick to. (6)

The researchers’ conclusion that there is no connection between late night eating and weight gain or increased fat storage appears to fall in line with the rest of the academic research on the topic. Let that be the end of this myth! (7, 8, 9, 10, 11)