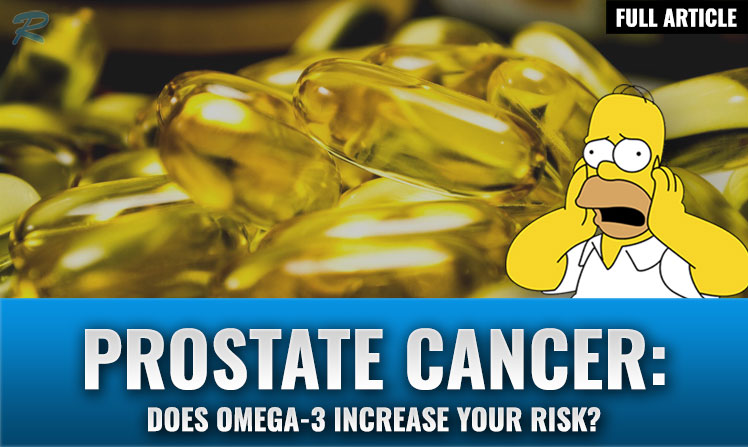 According to the media, there is a strong link between fish oil supplements and prostate cancer.

Prostate cancer sucks donkey d**k, so we should all be scared as f**k.

Gym rats have been using Omega-3 capsules for YEARS, so have we all been inadvertently boosting our risk of prostate cancer for the sake of getting massive biceps?

Today, I’m going to be looking at these claims and revealing the information which was conveniently left out of the media reports. But right from the start I’d like to say all athletes can rest easy and continue to use their Omega-3 supplements without fear, as it’s absolute bulls**t.

THE STUDY IN QUESTION

You’re in for a bumpy ride with this one!

The study in question was featured in the Journal of the National Cancer Institute back in 2013. Seems like a good place to get information on things which might increase the risk of cancer, right?

My initial response to reading this report was probably the same as yours right now:

Given that every bodybuilder, athlete, and health conscious member of the public probably uses Omega-3 supplements EVERY SINGLE DAY it’s no surprise the fitness world was shocked when this news broke.

However, you needn’t be concerned. Because despite the terrifying headlines and scaremongering, it’s all bulls**t.

This study has so many holes it could have been used as the plot for a Jean-Claude Van Damme movie. I’ll cut it to pieces for you down below.

I’m not alone in calling this study out, either.

Legendary bodybuilding coach Jim Stoppani, senior science editor for Muscle & Fitness magazine, had this to say on the matter:

“This so-called study is completely bogus.

I’ll get into the details further down this page, but I wanted to call BS as quickly as possible.

Sorry to be blunt, but it angers me when scientists publish weak statistical correlations that cause the media to get the public in a tizzy over the fake dangers of supplements.”

THE PROBLEM WITH THE STUDY IN QUESTION

First up, correlation does not equal causation.

Studies which look for correlation should never be trusted, as they’re merely looking to connect the dots to arrive at a predetermined conclusion.

Last year, 60% of people who died had the Facebook app installed on their phones. This correlates that installing Facebook on your mobile greatly increases your risk of death, when in reality all it increases is your chance of eye rolling at annoying work colleagues who post motivational quotes they definitely don’t live by.

If using fish oil supplements DID indeed boost the risk of developing prostate cancer by a whopping 70%, we wouldn’t even need a study to tell us about it.

Countries likes Albania, Algeria, Berundi, Cambodia, and Cameroon (where fish consumption is highest) would also be the countries with the highest rate of prostate cancer, and they’re not.

Heck, this is just the first hole poked through this paper-thin study.

Jim, who received his doctorate in biochemistry from the University of Connecticut, goes on:

“The blood levels of Omega-3 in the patients that this study considered ‘high risk’ for prostate cancer were 4.66%. The blood levels in the control group were 4.88%. That’s a statistically insignificant difference.

Another glaring problem here is that the researchers did not actually give any test subjects any Omega-3 supplements at all before jumping to their headline-grabbing conclusion. Heck, they didn’t even have anybody follow a high fish diet!

All they did was take selected data from old studies, look at the levels of DPA and EHA in certain patients’ blood, and then run tests to show there was a correlation between the rate of Omega-3 and the rate of prostate cancer.”

Several top research authorities have rubbished the claims, with some questioning why the Journal of the National Cancer Institute agreed to publish in the first place.

Because, bizarrely, the Omega-3 claims were only the tip of the iceberg in this clusterf**k of a research paper.

Incredibly, the exact same ‘study’ also correlated (there’s that word again!) that smoking is better for your health than not smoking. You read that correctly. Take a second, let it sink in.

It’s hard for me to say this with a striaght face, but it gets even worse…

They also concluded that having higher levels of trans fat correlates (!!) with a lower risk of cancer. Yes, trans fat! The one type of fat which serves absolutely zero nutritional purpose and has contributed massively to the obesity epidemic we currently have.

So for the final time; correlation does NOT equal causation.

If we actually believed any of the nonsense which was reported in this study then we’d stop eating fish and replace it with fast food and a smoking habit.

IN CONCLUSION: OMEGA-3 DOES NOT CAUSE PROSTATE CANCER!

Time to get serious here.

Sure, some of the benefits of Omega-3 are overhyped.

For instance, the fat burning benefits are slight at best. The government has long advised using Omega-3 supplements to protect against coronary heart disease, too, but a large 2018 meta-analysis found no benefits in that regard. (9, 10, 2, 3)

On the flipside, a regular intake of healthy Omega-3 fatty acids has been clinically proven to help you build more lean muscle tissue, reduce triglycerides and decrease inflammation. Inflammation plays a role in the development of cardiovascular disease, so it may help indirectly. (7, 8, 6, 4, 5)

But the one thing they most certainly will NOT do is cause f**king prostate cancer.

I despise headline-grabbing bulls**t like this, as it only causes confusion at a time when most people are ALREADY struggling to lead a healthy lifestyle. (11)

Like the recent headlines which claimed a glass of red wine is better than an hour of exercise, labeling obvious healthy choices like fish as “unhealthy” might give the authors a bit of clickbait but it also causes plenty of people to throw in the towel and go back to leading an unhealthy lifestyle because they’re sick of the conflicting information everywhere.

If you’ve enjoyed me debunking the link between fish oil and prostate cancer, jump on my free email list below for ongoing fitness tips straight out of my gym.