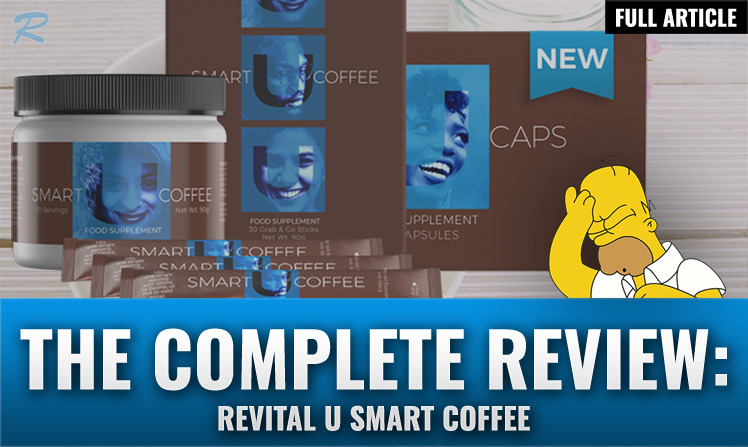 Revital U Smart Coffee Review – The Only HONEST Review Online

You know how it goes; suddenly you receive a friend request from Jane who hasn’t spoken to you in 20 years, and before you can say, “Hey! You used to bully me,” she’s inboxed you a sales pitch about how she’s living her #bestlife.

All you gotta do is sell your soul buy this drink.

The latest product these fiends friends are selling is Revital U Smart Coffee, and they’re convinced it’s the best weight loss supplement ever developed. So today I’m going to bring you the most comprehensive Revital U Smart Coffee review on the internet, so you can decide whether you want to accept that friend request…

In today’s review, I’ll look at all the most important questions surrounding this product, including:

What Is Revital U Smart Coffee?

As you can guess; it’s coffee. But not just any old cup of Joe, Smart Coffee has a few extra ingredients, too.

Caffeine is included for the purpose of – you guessed it – increasing energy output and creating a bigger calorie burn. Chromium acts as an appetite suppressor, which may help with calorie control.

We also have a blend of herbs and amino acids.

Revital U Smart Coffee Review – Does It Work?

In a nutshell; NO.

Despite the fact Revital U salespeople want you to believe this magic drink is causing your weight loss results, the truth is YOU ARE.

Supplement companies love labeling ingredients like caffeine and green tea extract as “FAT BURNERS”, even though there’s decades of academic research showing the opposite. The fat burning effects of caffeine are tiny at best. It’ll lead to a few extra calories being burned throughout the day, but it’s not a magic formula. (1, 2, 3, 4, 5, 6, 7, 8)

Also, how much ENERGY will you draw from 100mg of caffeine?

That’s the amount of caffeine in each cup of Smart Coffee, but a 2012 meta-analysis found this dose to be completely ineffective. The review study, which looked at over 70 clinical trials on caffeine supplementation, confirmed that a minimum of 2.1mg per kg of body weight is needed to reap ANY TRAINING BENEFITS AT ALL. (9)

That means a 175lb person would require 168mg caffeine to produce any benefits.

Smart Coffee is well short of this mark, with just 100mg in each serving!

The second ingredient in Revital U Smart Coffee is chromium.

Chromium is famed for its benefits as an appetite suppressor, which could be useful for someone who is trying to lose weight. But does it work?

Well, the key factor here is whether you have a chromium deficiency or not. If you do, then supplementing with additional chromium may help you to regain control of your appetite. If you don’t have one, it won’t do anything for you. (10, 11, 12, 13)

Further still, the clinical dose for effectiveness is 1000mcg per day, but Smart Coffee only contains one fifth of this.

Sure, you could have FIVE SCOOPS but that’d go against the company’s own guidelines to “only have one scoop per day.” Plus, the entire tub would run out after just 6 days. So don’t do that.

Finally, we get the inclusion of a “fat burning blend”…

This includes l-theanine, rhodiola rosea, garcinia cambogia, and choline. However, we do not know the dose of each ingredient, as Revital U have hidden it behind a proprietary blend.

This is bad news.

This is a supplement industry loophole that’s existed for years. By simply including an ingredient, a company is legally allowed to make bold marketing claims regarding what that ingredient can do – even if the product doesn’t contain enough of it to have any effects at all.

Example; I could add 1mg caffeine to a sports drink, and call it an ‘energy drink’,

You see, companies who do this may tell customers “it’s to protect their top secret formula from rivals looking to steal the formula”, but in reality a proprietary blend means one thing: the product is under-dosed.

So heed my warning: Any company that uses a proprietary blend in this day & age is LYING to you. If they’d included a clinical dose capable of yielding results, they’d put that in big bold letters for you to see.

But let’s break down these “hidden” ingredients anyway, because it’s interesting.

In the ingredient glossary on their website, Revital U claim that choline supports mental focus, energy, cognitive health, and reduced cravings. This is true, but what they conveniently don’t mention is that we need 500mg-2000mg daily to see those benefits, with a reduction in cravings only being seen near the very top end of this scale. (15, 16, 17)

Next up, we have l-theanine. This is a favorite of mine due to its ability to combat the popular “caffeine crash”. (18)

Not that you should experience much of a comedown from the 100mg caffeine you’ll find in this product, but in failing to provide any indication of the dose used, we can only presume there’s not enough of it to make a difference anyway.

Garcinia Cambogia comes next. This ingredient was the fitness industry’s next big “fat burner”… of 1998.

Revital U play heavily on supposed benefits of HCA (hydroxycitric acid), which is inside Garcinia Cambogia, hailing it as the key to it being such a great appetite suppressor. They boast about how the dose of Garcinia Cambogia found in Smart Coffee consists of 50% HCA, but they don’t tell you how big that dose is, and they also don’t tell you that despite showing early promise in studies on rats, all human trials completely failed.

It turns out we don’t work the same way as rats (who knew?).

Any lingering hopes for HCA being a weight loss supplement were thoroughly squashed in a series of well-conducted trials back in the early 2000’s. (19, 20, 21)

Finally, we have Rhodiola Rosea.

This feel-good herb is another favorite of mine, as it has benefits with regards to improving mood and lowering fatigue during exercise. However, we’d need a dose of 100mg-200mg to see those benefits, and given that Revital U chose to hide the dosage (again), so we can only assume it’s below the required threshold to produce results. (22, 23, 24)

I’m not a fan of fat burners in general; they’re over-hyped, and have very limited research to support them. However, if you are dead set on getting a fat burner, get this one. At least it provides higher doses at a lower price.

But The Worst Thing About Smart Coffee IS THIS…

As you can see, we DON’T have a miracle weight loss product here.

Although, the company don’t really present it as one.

Sure, they over-hype the benefits of Smart Coffee, but they’re not hailing it as a miracle pill. That’s where the salespeople come in, and this is when problems really begin to mount…

The reason for the heavily inflated price of Smart Coffee is that Revital U operates as a home based business opportunity (MLM), much like Juice Plus, which gives affiliates the chance to earn commissions from signing people up to receive monthly subscriptions of Smart Coffee.

In doing so, Revital U have grown quite fast as a company, but they have also opened up the gates of hell…

A quick scroll through social media will reveal posts containing all kinds of weird and mysterious weight loss sorcery from f**knuckles who will say literally anything to make a sale.

Check out the corker below:

According to this quote, just one cup of Smart Coffee per day was able to rip a hole in the space/time continuum and suck Michelle’s belly fat into the vortex!

If this was the case, this salesperson would not be selling coffee to her pals on Facebook, she’d be on her way to receive a f**king Nobel Prize for being the first person to ever defy the law of thermodynamics. (14)

Another thing I dislike about sales reps is that they have a nasty tendency to invent fake qualifications to gain a client’s trust. Remember the pushy mum fro the schoolyard who started selling Juice Plus and suddenly she’s a “wellbeing coach”..?

Marvelously, the person who made the quote above goes on to call themselves a Smart Coffee Consultant…

They do this to falsely position themselves as an authority and gain the trust of potential customers. Basically, you can’t call yourself a personal trainer if you’re not a qualified PT, and you can’t call yourself a dietitian if you’re not a qualified RD; you could get sued. But calling yourself a coffee consultant, or a nutrition advisor? Well, they don’t require any qualifications because they’re entirely made up, and they make it sound like you know what you’re talking about and sounds less scammy than ‘affiliate’.

I’m glad I got that off my chest.

This is a product with very weak links to weight loss, which the manufacturer claims can “energize you from within”.

And hey, I have to mention the price.

At £49.99 for a one month supply, you could pick up the two main ingredients of Smart Coffee on their own for considerably less.

So what final score do I give Revital U Smart Coffee today?

It gets one star. It’s dirt cheap to produce. It’s under-dosed. And you can do better.

If you know someone who sells this stuff, share this review on Facebook and watch the fireworks.